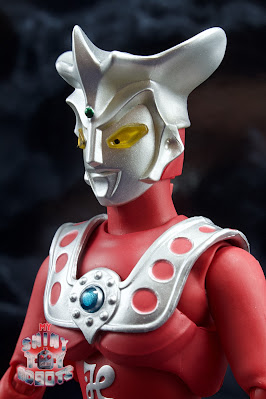 Release Date: November 2021
RRP: 6050 yen
Although the Ultraman S.H. Figuarts range seems to have largely switched focus towards the newer side of the franchise, Bandai Tamashii Nations have still been slowly chipping away at the Showa era. And with the release of S.H. Figuarts Ultraman Leo, the brand have finally reached the milestone of releasing all the "core" Ultra Brothers from the first seven series. Trained by Ultraseven before going on to train Seven's own son Ultraman Zero, the space martial artist Ultraman Leo hails from the 1974 series and is a long-awaited addition to the S.H. Figuarts Ultraman collection. 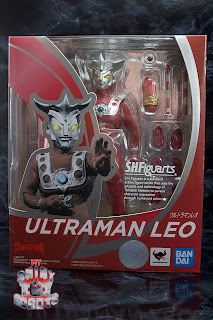 As has been the case with nearly all of the Showa era Ultraman figures, S.H. Figuarts Ultraman Leo comes in a red box similar in shade to the Ultraman body colour, decorated with silver sections. Alongside the window section lies an image of Ultraman Leo from the show itself, giving the packaging a suitably classic look. On one side of the box you'll find the bookend style image that all the Ultraman Figuarts have featured, and then on the back an array of images showing the figure (and accessories) off in various poses. Open it up and all these parts are neatly laid out on the usual moulded plastic tray. 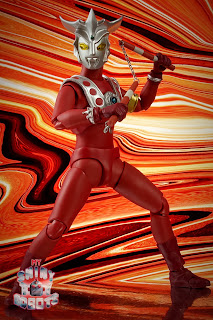 As an Ultra Warrior from the Planet L77 Ultraman Leo's design slightly differs from the Ultras of the M78 Nebula, though all the core design aspects remain intact. Leo sports a predominantly red body, with the only main areas of silver being his head, Ultra Armour and stomach marking. Said head is quite a unique design amongst the Ultras, featuring curved horn-like "leope". The emblem on his stomach is the Leo Mark, a symbol of his royal status on L77. As per the suit itself, the symbol is raised moulding on the figure and then painted silver. Though it might not seem like there are a whole lot of intricate areas on the figure to commend when it comes to painting, little areas such as the Leo Bracelets on each wrist show the levels of precision Bandai can show. The shade of red used on the figure is a little more washed out than the brighter colours seen in Leo's modern franchise appearances, but gives the look a more retro/Showa-esque feel as well as matching with the rest of the Ultra Brother releases. 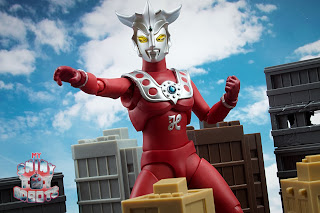 While they may all differ in design the base body for the Showa Ultraman has barely changed at all over the years, so Leo sports all the same articulation points as his fellow Ultra Brothers. Altogether this includes;
- Peg hinge head
- Ball jointed neck, torso, waist and wrists
- Swivel hinge shoulders, hips and ankles
- Butterfly joint shoulders
- Double hinge elbows and knees
- Single hinge toes Thigh swivels
The previous Showa Ultras have had their problems when it comes to articulation but for the most part this has come down the difficulty in pulling off the perfect beam firing pose, but since Leo's is actually a relatively simple one that isn't something that immediately comes to mind here. Instead you can just enjoy all the poseability the figure has to offer, all of which is ideal for those essential space martial arts poses. None of the joints here seems overly tight or squeaky either, which is another issue that has been present on some of the previous releases. The double hinge elbows and knees might need a tiny bit of working out of the box just to get the full bend, but it's certainly nothing drastic or requiring of additional lubricant just to get them working as they should. 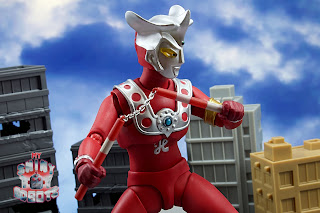 Ultraman figures can often be pretty hit or miss when it comes to accessories, with some coming with numerous series-specific pieces while others are simply content to just stick with a basic hands and beam effect combination. Leo however definitely falls into that former category, with Bandai really doing their best to cover all bases on this release. Altogether the figure comes with ten additional hands, replacement red colour timer, replacement upper left arm with bracelet, Leo Nunchaku, Leo Kick effect part and an Energy Light Ball effect part (with designated stand parts). Despite how scary it might sound swapping out an upper arm part it's not nearly as terrifying as you might think, thanks to the ball joint connection used to pop it into the torso. Similarly swapping the colour timers has always been a nightmare on the Showa Ultraman figures, largely due to both how small they are and how tightly they slot into the body. However this is another case where Bandai have made it as easy as possible, with the Ultra Armour around the torso able to raise off to allow you to pop out and replace the Timer. The hand selection is made up of the usual kind you see with Ultraman figures (knifestrike hands for example), but pairs such as the accessory holding hands or posed martial arts ones are a little more unique.

But as great as all those pieces are, it's all these weapons that truly sell this release. While the nunchaku might be fairly basic in design, the metal chain connecting them really gives them a more premium feel and makes them brilliant for posing. Meanwhile the Energy Light Ball may be similar to the many beam effects we've seen over the years but the shaping and fact it needs additional support makes it stand out nicely from some of the more basic Showa era ones. Finally we have the Leo Kick effect, a flaming piece of translucent red plastic which slots over the right foot. As small as it may be this is a really cool little effect piece, similar to the Rider Kick effect that came with the old Showa Kamen Rider figures but far easier to attach. While there are plenty of other accessories they could have included here (the Umbrella is the one that immediately springs to mind), you can't deny that Bandai did their best to include all of the essentials here – neatly covering both Leo's standard Ultraman abilities and his space martial arts prowess. 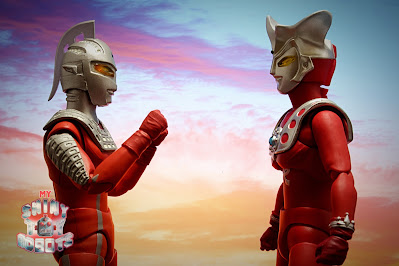 The classic Ultraman S.H. Figuarts have all been pretty solid figures in their own right, but they all seem to have at least one notable flaw which sees them fall just short of perfection. However it feels like Bandai have finally broken that streak with S.H. Figuarts Ultraman Leo. While the figure itself isn't really that fundamentally different to the ones that came before it, there's just something about this release where everything clicks – bringing out the best of this tried and tested mould without any of the bad. The accessories just make it all the better, including all the staples of an Ultraman release along with a couple of more unique pieces that make Leo stand out. As the last of the seven "core" Showa Ultras to be released, Bandai sure rounded them off with a bang.