Yes, you can actually write with it.

In the modern era, written communication has become almost entirely digital. Work reports, school papers, emails, and text messages, and increasingly even the memos and reminders we create for ourselves, are things we type or tap, not physically “write.”

All that can give those rare times we do actually put pencil to paper a dramatic weight, and if you happen to be using this pencil from Osaka-based stationery maker Sakura Craypas, a literal weight as well.

There’s no image manipulation going on in that photo, either, as the company, whose full name is Sakura Color Products Corp., actually put together a mechanical pencil that’s so big you have to lay its back half on top of your shoulder when writing. And yes, it really does write, with the lead coming out in clicks or sliding back into the shaft just like with a non-insane-size writing instrument.

▼ The giant pencil next to some of Sakura Craypas’ standard models

While it may not be the most practical design, more than a few online commenters have expressed a desire for one of their own:

“If they sold this in stores, I‘d totally buy it.”
“Are you supposed to strap it to your back when you need to go somewhere?”
“Looks like the Dragon Slayer sword from the Berserk manga.”
“That pen is physically mightier than any sword.”
“It’s still too small for a Gundam to use, but I think it might work for a nine-meter robot like the ones in Patlabor.!”
“You’d have to use an umbrella stand as your pencil holder.”

Unfortunately, Sakura Craypas has not currently announced any plans to sell or give away its giant pencil. That might be for the best, though, since writer’s cramp is painful enough without adding back strain to it. 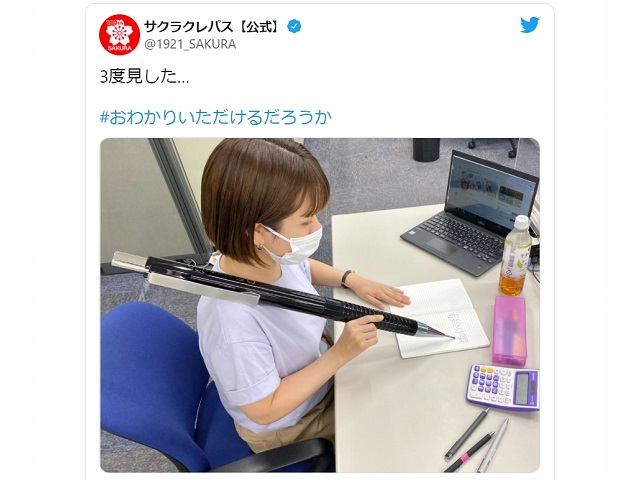