Organizing workers in the United States is almost always hard because corporations fight so fiercely against unionization, but if any workplace was considered impossible to unionize, it was an Amazon warehouse. First, because Amazon has famously mounted such ferocious, full-court presses to stifle unionization efforts. And second, because unionizing a warehouse with thousands of workers is logistically daunting. Nonetheless, last week a tiny, new, underfunded union managed to pierce Amazon’s Maginot Line at an 8,000-employee warehouse in Staten Island, New York.

As a result of that huge upset victory, executives across corporate America are no doubt wondering whether their carefully constructed anti-union defenses are nearly as impregnable as they thought, and whether their decades of being “union free” will soon be over. C-suite concern is warranted, but a surge of unionization that increases worker power and pressures corporations to share more of their profits is far from guaranteed. Union leaders across the nation would have to rise to the occasion—and so far that’s not happening.

The victory at Amazon, as well as a string of such victories at Starbucks that started with a café in Buffalo, New York, reflects teeming pro-union excitement among many workers, especially young workers. The secret of the union successes at Starbucks and at Amazon on Staten Island was to largely use rank-and-file worker activists to reach out to their co-workers to organize and mobilize them, knowing how unhappy many of their co-workers were. At Amazon, Starbucks, and other corporations, many workers believe that their bosses have treated them shabbily during the pandemic, are angry that their wages have merely inched up while corporate profits and Wall Street have soared to record after record, are fearful that their pay won’t keep up with inflation, are exasperated that their company often ignores their suggestions about how to improve working conditions. After years of being told that the way to improve your economic lot is to lift yourself up by your bootstraps, many young workers—often inspired by Senator Bernie Sanders—have come to realize that the best way to lift themselves up is through collective power. That is, by unionizing.

Now America’s unions—hopefully helped by supporters of a fairer economy in general—need to make sure that the worker-to-worker organizing strategy used at Amazon spreads to dozens of other companies and hundreds or even thousands of other workplaces. The nation’s unions need to help train workers across the U.S. on how to use this organizing model. They also need to invest some serious money to underwrite worker-to-worker union drives.

The Amazon Labor Union, the one that succeeded in Staten Island, is a new, independent, stand-alone union. It probably does not have the resources to unionize even a few other Amazon warehouses. It relied on GoFundMe for money and on two dozen current Staten Island Amazon employees to organize other workers at their warehouse. Nor can other warehouses easily replicate what happened in Staten Island: They may not have the organizing genius that the leaders of the Staten Island campaign, Christian Smalls and Derrick Palmer, clearly demonstrated.

The most effective way for the Amazon Labor Union to do more organizing would be to affiliate with a larger, richer union—perhaps the Service Employees International Union (SEIU), the Teamsters, or the Retail, Wholesale and Department Store Union—and continue under a shared umbrella. With the financial muscle and legal staff of a larger union, the Amazon Labor Union’s key organizers could travel around the country to advise workers at other fulfillment centers on how to engineer their own worker-to-worker union victories. Granted, the Amazon Labor Union’s leaders might want to guard their independence and their reputation for being of, by, and for Amazon workers and not part of a big, bureaucratic union.

Formal affiliation isn’t the only option, though. In the absence of an official relationship, bigger unions can still offer their assistance in the form of money, lawyers, and organizing expertise. Worker-to-worker organizing is a wonderful bottom-up model, but top-down investment and support from national unions would certainly help that model expand.

The Starbucks story doesn’t exactly spur optimism that America’s labor leadership will wake up. After the initial union victory at the Buffalo Starbucks last December, workers at more than 150 Starbucks in some 30 states have petitioned to hold unionization elections. Even so, the larger union movement has not pushed to transform all this excitement into a bigger and broader unionization wave, one in which workers at 1,500 Starbucks instead of 150 would be petitioning to unionize. The Starbucks organizing effort has been carried out by Workers United, an arm of the SEIU. Other unions have done little to help, aside from making occasional statements or speeches.

If union leaders are sincere in their talk about reversing the labor movement’s decades-long decline, they need to encourage the unionization bug to jump from Starbucks and Amazon to McDonald’s, Chipotle, Burger King, Walmart, Target, and elsewhere. There’s far too much inertia among labor officialdom—the folks who have tens of millions of dollars in resources—and not enough vision on how to optimize this moment.

Thus far, I haven’t heard any all-hands-on-deck calls by the nation’s labor leaders—that they all need to pull together, to dive in together, to try to turn this promising moment into a magical resurgence. I haven’t heard many labor leaders say that they have to do their utmost to fertilize grassroots organizing and make unionization efforts grow as fast and large as possible. Unionizing just 20 Amazon warehouses would add more than 100,000 workers to the nation’s union rolls.

Labor leaders tend to balk at launching ambitious union drives, because organizing hundreds or thousands of workers typically costs lots of money.  That hesitation helps explain why union membership has declined from more than 20 percent of the workforce in the 1980s to just 10.3 percent today. Many labor leaders insist that their hesitation is entirely rational, because the fierceness of corporate America’s anti-union efforts makes winning union drives a long shot. So, they ask, why spend all that money and exert all that energy when you’re likely to lose, especially when America’s labor laws tilt the playing field so strongly in favor of corporations and against unions during unionization campaigns?

But even budget-minded union officials should be enthusiastic about the worker-to-worker organizing model that succeeded at Amazon in Staten Island and at nine Starbucks cafés thus far. It is a far less expensive model than the traditional one, which relies overwhelmingly on paid union organizers. The Amazon Labor Union spent just $120,000 to organize more than 8,000 workers—$15 a worker, less than one-30th of what many unions spend per worker in organizing.

A little-understood but big advantage of worker-to-worker organizing is that when a workplace’s employees vote on whether to unionize, they feel that they’re not choosing between their employer—whom they might not like—and an aloof, often bureaucratic, little-known union. Instead, they feel that they’re choosing between their employer and an energized, concerned group of co-workers and friends that is eager to build a better workplace. For many workers, that makes voting for the union a no-brainer.

If labor unions and worker advocates truly seize the moment and do their best to build on it, that could mean America’s labor unions will finally grow rather than continue shrinking—and be in a far better, stronger position to lift workers, push for raises, and create a fairer economy. But if they don’t, corporate America can probably relax. 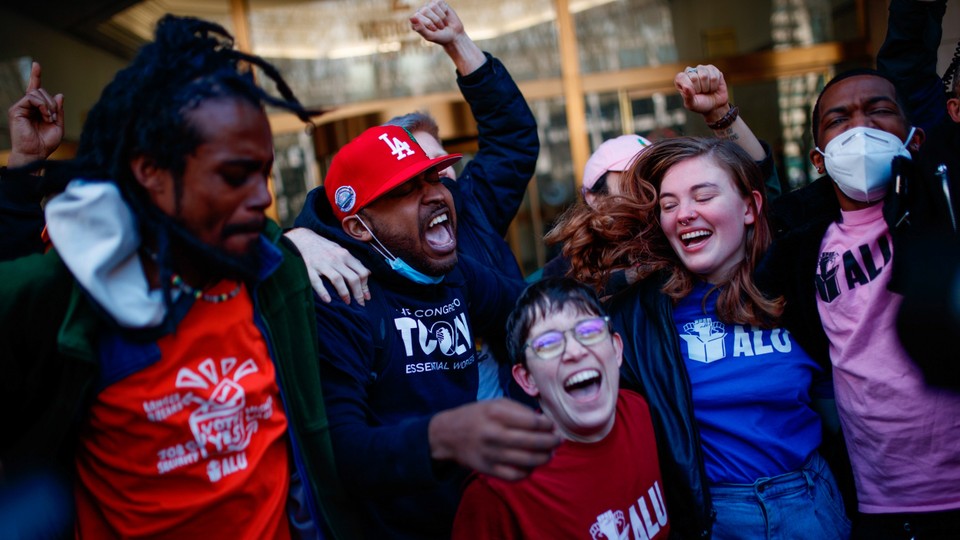