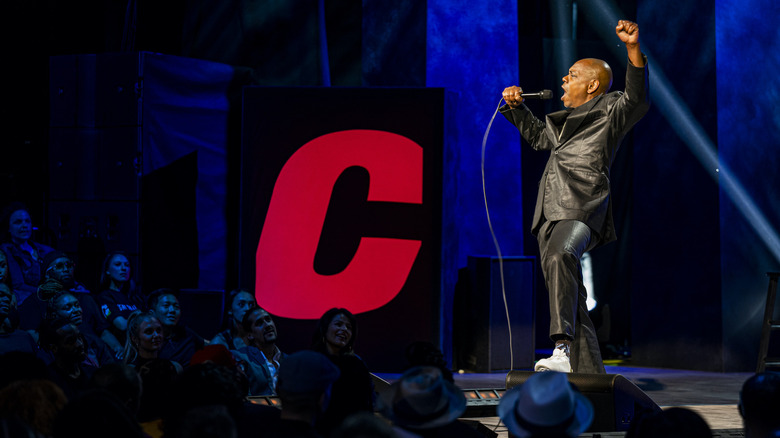 In his sixth stand-up special for Netflix, "The Closer," Dave Chappelle has completed his deal with the streamer and gone out on a note so sour, Warheads candies seem sweet by comparison. Upon its release on Tuesday, audiences have been taking to social media to express their outrage, and both GLAAD and The National Black Justice Coalition have called for the special's removal from the streaming platform, noting the very real harm his words may cause.

"This is going to be my last special for a minute," he says in the special. Honestly? Good.

Once upon a time, Dave Chappelle was a boundary-pushing comedian who offered brilliant and biting commentary on systemic racism and bigotry in America, knowing full well that using comedy as a vehicle to educate had the potential to enact genuine change. His career spans decades and three seasons of "Chappelle's Show" on Comedy Central defined what was considered "funny" for most of the 2000s. Chappelle would say on "My Next Guest Needs No Introduction With David Letterman" that the show ended because he was concerned that his comedy was getting misinterpreted by people who didn't have a strong enough grasp on the context. Knowing how freely white teens would spout "F*ck yo couch, [n-word]!" fifteen years ago, he was right.

In the last few years, unfortunately, the Dave Chappelle that influenced a generation has completely lost what made him groundbreaking and has instead turned into the very thing he's always set out to criticize — an oppressor.

Everyone Is A Target 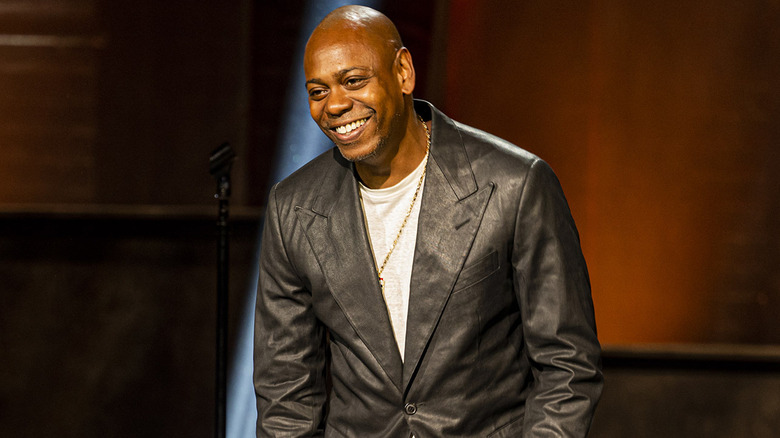 Dave Chappelle is known for going after everyone, regardless of identity, and this special is no different. Part of his special contains him talking about contracting COVID-19 back in January, making plenty of jokes at his own expense. It was rumored that Chappelle had caught COVID-19 after being photographed maskless indoors with perpetual douche bros Joe Rogan and Elon Musk, but this was proven false.

That doesn't change the fact that he was totally cool with going out maskless and hanging out with propaganda peddlers in the middle of a pandemic, but that's an entirely different annoyance.

He brings up his disappointment in seeing the violence against the Asian community because of the pandemic, but immediately takes a turn for the bigoted by saying, "I couldn't help but feel like, when I saw these brothers beating these Asians up, that's probably what's happening inside of my body" in reference to his Johnson & Johnson vaccine fighting the virus. This supposed "joke" is no different than Trump calling it the "Wuhan Virus" or the "Kung-Flu."

Apparently being "The GOAT" excuses his xenophobic comments and perpetuation of offensive mistruths, at least in his mind. Not long after, he attempted to comment on the Israel-Palestine conflict with antisemitic nonsense, resulting in the punchline "Space Jews" trending at one point on Twitter, which is alarming, to say the least.

Mind you, this is all in the first 10 minutes.

Using The LGBTQ+ Community As A Punching Bag 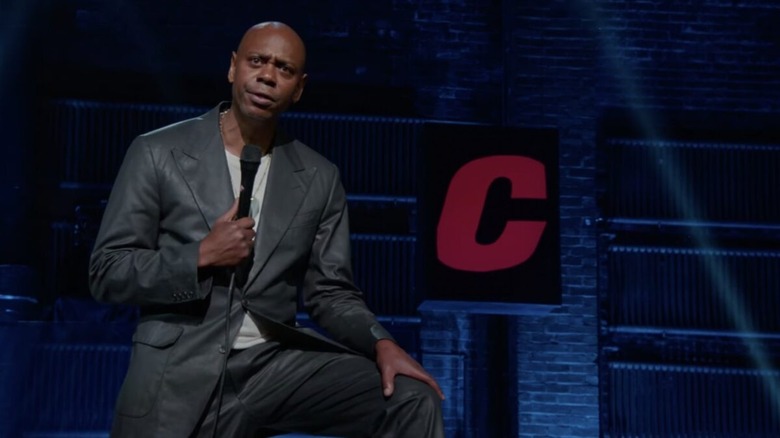 But the comments that are really causing outrage for ol' Dave are his barrage of jokes focusing on the LGBTQ+ community, and trans women, in particular. He brings up rapper DaBaby, who said some homophobic nonsense about Lil Nas X and AIDS and notes that his history of shooting someone did less to harm his career than his bigoted remarks. "In our country, you can shoot and kill a [n-word], but you better not hurt a gay person's feelings," he says. He fails to acknowledge that DaBaby was allegedly defending himself and instead chooses to pit racial injustice against LGBTQ+ acceptance as if the two cannot exist simultaneously.

"If slaves had oil and booty shorts on, we might have been free 100 years sooner," he says. "Gay people are minorities until they need to be white again." Look, Dave is right in that there are serious issues with white members of the LGBTQ+ community and a lack of intersectionality. Inarguably. But what Dave doesn't realize is that he's doing the same damn thing by completely disregarding the existence of Black queer people.

Eric Deggans of NPR noted in his review that Chappelle "ignores the fact that there are plenty of nonwhite gay people who face oppression for both their sexual orientation and their race." He continues, "And, of course, opposing these public statements of homophobia isn't just about making gay people feel better; it's about keeping the anger and prejudice behind those words from becoming widely acceptable or turning into action."

Dave also tells a ridiculously uncomfortable story about the time he "beat the sh*t" out of a butch lesbian, and notes that he misses the days of Stonewall gays. The Stonewall Riots happened over 50 years ago so he might as well be "old man yells at cloud."

An Obsession With Dismissing Trans Women 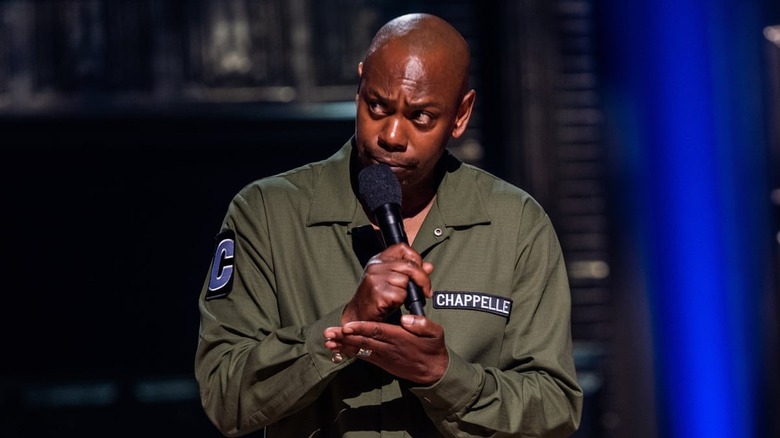 Perhaps most insidiously, Dave continues a trend for the third special in a row where he dedicates a huge chunk of time to dismissing trans women. He proudly claims to be "Team TERF" (trans-exclusionary radical feminist), defends J.K. Rowling, and makes ignorant as hell comments comparing gender transition to blackface. It's unnecessary, disgusting, and continues to perpetuate harmful stereotypes that lead to legitimate violence.

Seriously, Netflix? You're going to have this disgusting display on the same streaming network as Laverne Cox's documentary, "Disclosure," which shows how the dehumanization of trans women leads to real-life violence?

He playfully jokes that the transgender community "wants him dead" due to his years-long obsession with mocking the LGBTQ+ community, but tries to cover his own ass by saying, "Any of you who have ever watched me know that I have never had a problem with transgender people. If you listen to what I'm saying, clearly, my problem has always been with white people," he claims. If that's true, Dave, then why are you constantly attacking a marginalized community that Black people also belong to?

Dave may not have privilege as a Black person in a white supremacist society, but he sure as f*ck does as a cisgender heterosexual man and has continually used that privilege to humiliate those of marginalized gender identities and sexuality. For a man who shut down his show knowing that people weren't understanding the greater point of his message, he sure has no problem continuing to spit dangerous rhetoric as long as the community being impacted isn't one he belongs to. 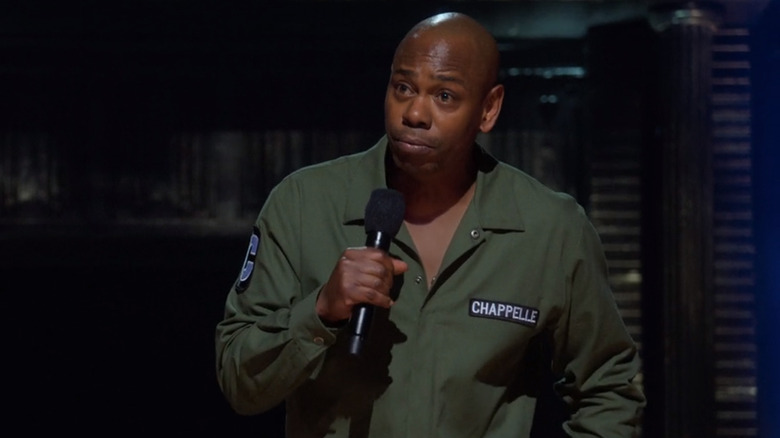 "The Closer" ends on an incredibly somber note, but one that also inspires downright fury.

In Chappelle's previous special, "Sticks & Stones," he told the story about transgender comedian Daphne Dorman whom he had open for him during a club appearance in 2019. After the release of the special, Dorman died by suicide. He talks a lot about the criticism she met on social media for defending him and announces that he's started a trust for Dorman's daughter. It's a genuine and noble act, but one that feels performative considering just minutes before he was misgendering Caitlyn Jenner and comparing trans women's bodies to vegan meat substitutes.

The National Black Justice Coalition's executive director, David Johns, spoke out about his comments saying, "It is deeply disappointing that Netflix allowed Dave Chappelle's lazy and hostile transphobia and homophobia to air on its platform." He continued stating facts like, "With 2021 on track to be the deadliest year on record for transgender people in the United States — the majority of whom are Black transgender people — Netflix should know better. Perpetuating transphobia perpetuates violence."

Apparently, though, Dave is done talking about it. He ends "The Closer," by saying, "I am not telling another joke about you until we are both sure that we are laughing together." He continues, "All I ask from your community, with all humility, will you please stop punching down on my people?"

What does "your community" mean, Dave? Because while it'd be easy to lump the LGBTQ+ community alongside white supremacists (trust and believe, there are plenty of white gays that need serious racial education), that blanket statement is harmful to all of the people under the umbrella who do not benefit from white supremacy. 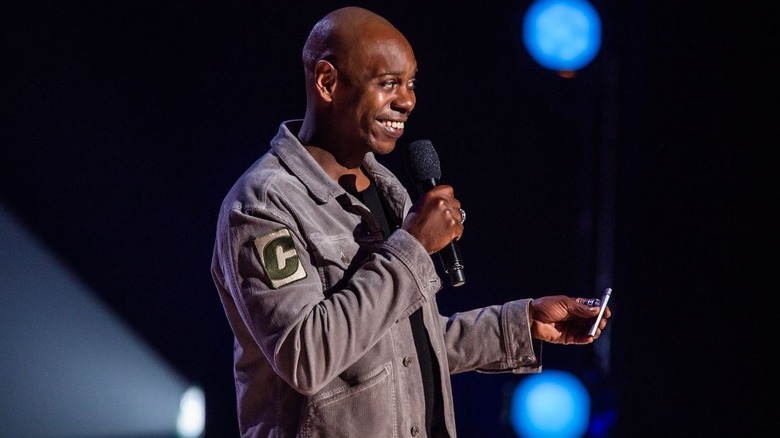 And so ends another comedy special from a millionaire on the biggest streaming platform in the world laughing about how his comments are going to get him "canceled." Plenty of organizations have called for the special's removal which will absolutely not happen, and Netflix has declined to comment with any publications who have reached out. "The Closer" is here to stay and will play over and over across the globe long after the outrage upon its release has died down.

The reality is that this article, and many others like it, will be screenshot, mocked, and ridiculed by his defenders as they loudly proclaim that any of us wanting to hold him accountable are "proving his point," "too sensitive," or "can't take a joke."

Sometimes, though, like in the case of "The Closer," the jokes just aren't funny.