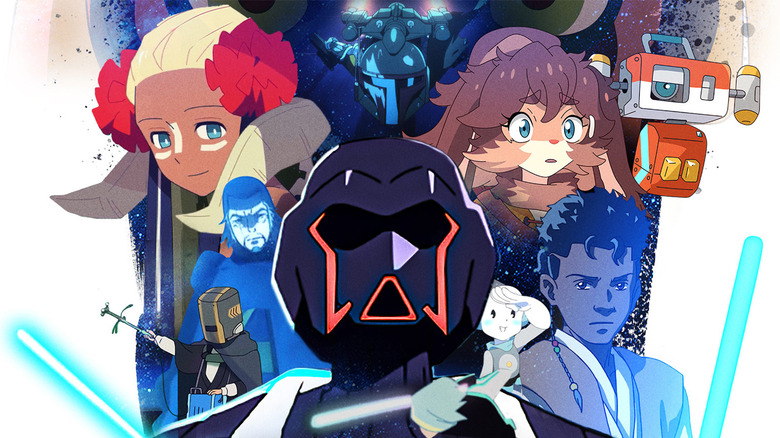 This week brings "Star Wars: Visions" to Disney+, taking the sci-fi saga in a completely new direction with a series of standalone stories presented in the style of Japanese anime. While the mere concept might immediately turn off those who couldn't care less about anime, as both a longtime "Star Wars" fan and someone who doesn't have a great appreciation for this particular animation style, I can tell you that "Star Wars: Visions" is still worth watching for the masterful visuals, the wild twists on "Star Wars" paraphernalia, and the compelling assembly of tales of heroes who stand up to the face of evil -- no matter what the cost.

The Anime Of It All 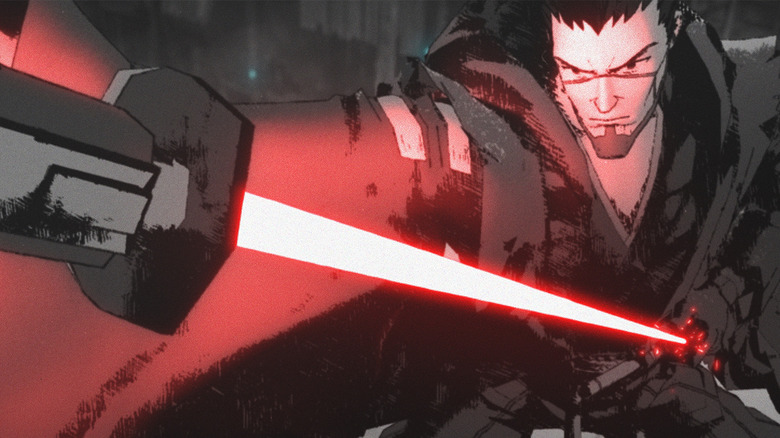 A lot of people who are inexperienced with anime still have a general impression of it. Some immediately think of shows like "Pokémon" and "Dragonball Z," while others veer towards more mature offerings like "Akira" or "Cowboy Bebop." There's also the films of Studio Ghibli, such as "My Neighbor Totoro" or "Princess Mononoke." Then we have the far more mature offerings involving schoolgirls with unfathomably large breasts and other assorted eroticism. But there's something about combining anime and "Star Wars" that makes "Visions" feel like it's in a category of its own, despite leaning into certain anime tropes and traditions.

In "Star Wars: Visions" you'll find a variety of anime styles that change with the type of story that's being told. "The Duel" calls back to the films of Akira Kurosawa, whose work inspired George Lucas when he was making the original "Star Wars," so the animation has an ancient pencil sketch style that feels like a scroll come to life. Then, on the other end of the spectrum, you have something like "Tatooine Rhapsody," which leans towards the cuter Chibi side of anime mixed with Bryan Lee O'Malley's "Scott Pilgrim" graphic novels (and the story very much feels like a "Scott Pilgrim vs. the World" adventure too).

In-between you have the more traditional anime style that many are familiar with today. "The Twins" has a "Dragonball Z" vibe to it while stories like "The Village Bride" or "The Ninth Jedi" veer into Studio Ghibli territory. There's also some vintage anime thrown in there with "T0-B1" feeling like a "Star Wars" riff on "Astro Boy." There's something for every kind of "Star Wars" fan to enjoy, and the anime style wasn't off-putting to me at all. If anything, I was impressed with how anime enhanced and enriched the "Star Wars" universe. 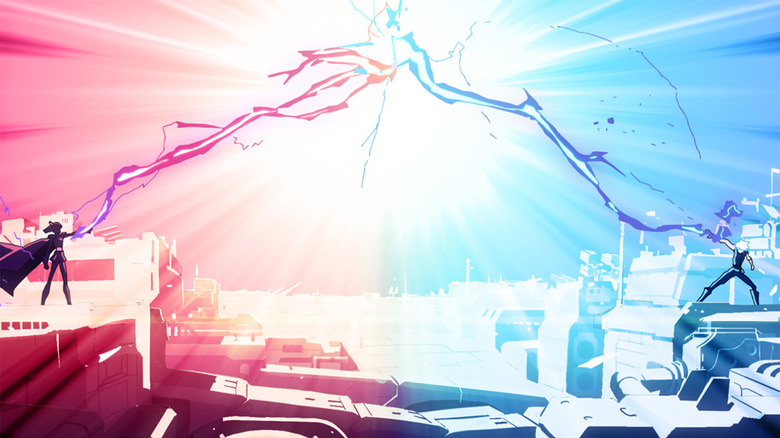 One of the most praiseworthy aspects of "Star Wars: Visions" are the incredible visuals. Even if your experience with anime is limited, you'll know the animation style offers the potential for wild imagery -- especially when it comes to elevated combat scenarios. When dealing with Jedi and Sith, anime takes the depiction of the Force and lightsaber battles to the next level.

There are shots in "Star Wars: Visions" that feel like two-page comic book spreads in spectacular motion, especially in "The Twins," which comes close to imagining what it would have been like if Luke Skywalker and Princess Leia had been raised in the dark side of the Force (without using the actual characters, of course). Almost every frame of "The Duel" feels like a sketch that belongs in an art gallery. And there are picturesque landscapes from "The Village Bride" and "Akakri" that will take your breath away.

Anime allows for such a wide range of visuals that are awe-inspiring in a variety of ways. If you give "Star Wars: Visions" a chance, I'm betting that you'll be impressed by how beautiful the "Star Wars" universe looks in a variety of Japanese animation styles. 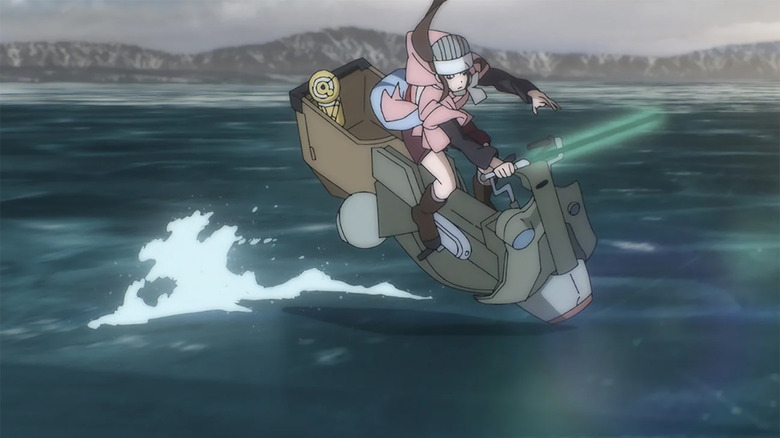 "The Duel" gives us a lightsaber staff with an attachment resembling a wiry umbrella that spins at incalculable speeds, creating an impenetrable whirlwind of a lightsaber blade that deflects even the most precise blaster shots. "The Twins" gives two Sith siblings an absolutely insane lightsaber battle that happens on the surface of two Star Destroyers with a Death Star-style super-weapon connecting them. "Tatooine Rhapsody" takes us on an entertaining chase between Boba Fett and a literal band of misfits who are wanted by Jabba the Hutt. "The Ninth Jedi" delivers a thrilling speeder chase that rivals "Return of the Jedi."

On top of that, you've never seen Force abilities used in such a cool way. In addition to the wild lightsaber fights, "The Twins" also has the most impressive display of the Force in an ostentatious but satisfying fashion. Several of the stories have little moments where you'll be surprised by the power of the Force. Meanwhile, there are shorts that tap into the Force in a much more Jedi-worthy fashion, appreciating the peace and patience required to truly become one with the Force.

When it comes to the Sith, there are a lot of fantastic new villains. They only get so much screen time due to the short length of these animated stories, but a handful of them are even more compelling than Kylo Ren, and a couple are significantly more terrifying, especially when it comes to the design of their helmets and armor. There are villains here who deserve to be in a full-fledged "Star Wars" movie or TV series. In fact, a couple of the stories themselves would make for entertaining additions to the live-action "Star Wars" universe. 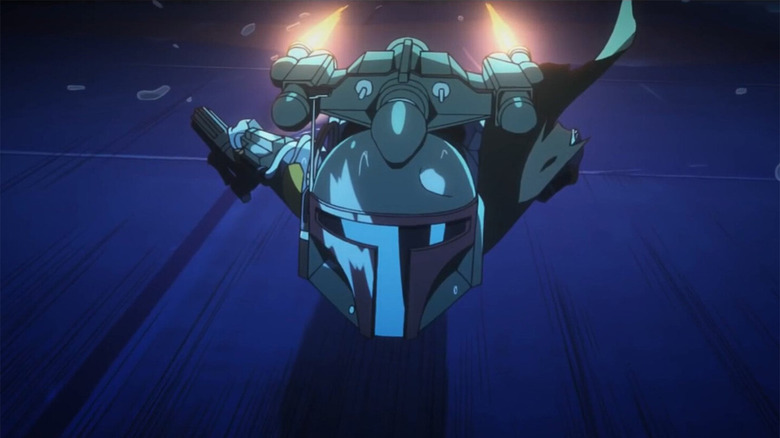 Perhaps what makes "Star Wars: Visions" standout from the rest of the pack is that it doesn't feel like it has to slavishly adhere to the "Star Wars" playbook. While there are clear winks and nods and an overall feel that makes each tale feel like a "Star Wars" story, none of them ever feel held back by the framework of the franchise. There's a lot of creative liberties taken with the "Star Wars" universe, and that's what makes this feel like the kind of creative jolt needed in a galaxy far, far away.

Why can't we see stories like this play out on a grand scale? If "The Ninth Jedi" was turned into a feature film, I would be ecstatic. If Lucasfilm was bold enough to give the characters of "Tatooine Rhapsody" their own adventure-of-the-week animated series, I'd be there in a heartbeat. There's a lot of greatness in "Star Wars: Visions," and I hope it inspires a more bold direction for "Star Wars" in the future.

Read this next: Star Wars: Visions Review: A Refreshing And Gorgeous Spin On A Galaxy Far, Far Away

The post You Don't Have to Be an Anime Fan to Enjoy Star Wars: Visions appeared first on /Film.