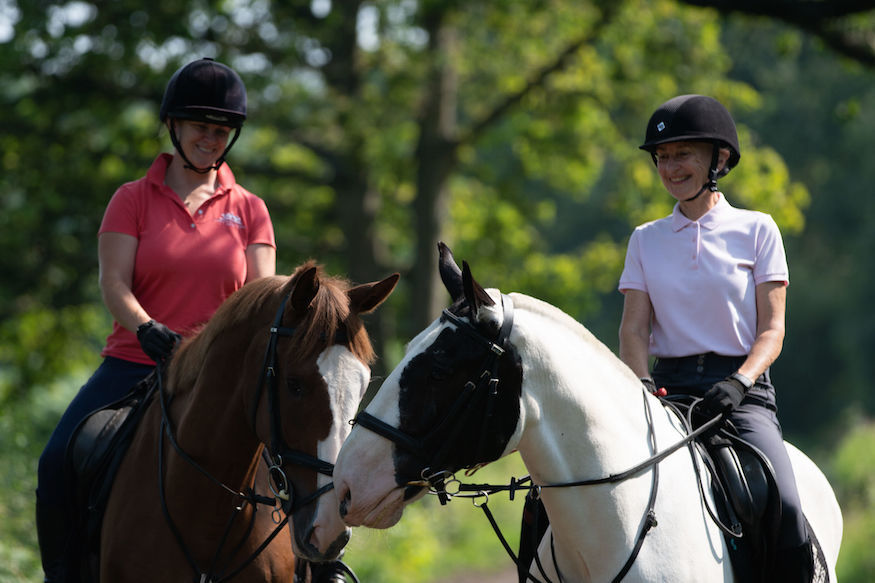 London's got a long history with horses. Our reliance on them as a method of transport shaped many of our buildings and thoroughfares, and many people live in mews houses which would once have been stables.

But what about horses in London today? Though the Circle line now trumps a shire horse as a way of getting around, you can still ride horses in the capital. Whether you're a child or adult, beginner or experienced rider, here's where to get in the saddle in London. 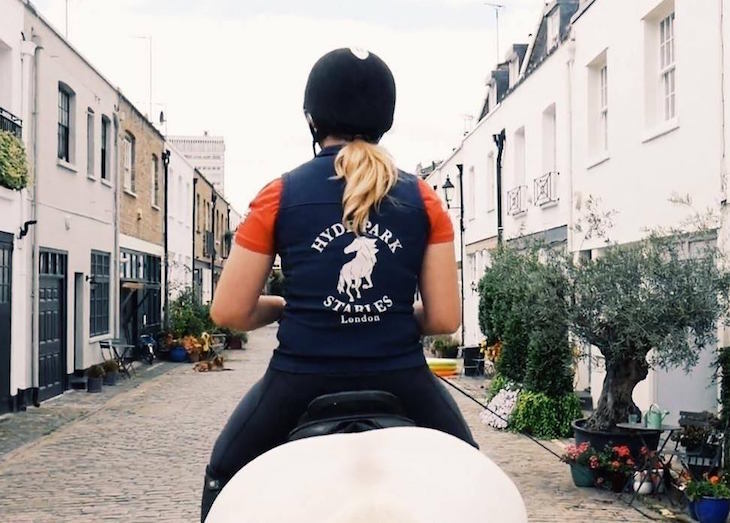 What was the one place your mother taught you never to stand? Photo: Hyde Park Stables

We reckon this — and the below — is London's most central public stables (The Met Police have stables for the police horses at Charing Cross, but that's another matter). The horses live just a five-minute trot from Hyde Park, close to Lancaster Gate tube station.

Lessons are available for everyone from complete beginners upwards. They all take place in Hyde Park itself, either on the famous Rotten Row, or on one of two special arenas (or manèges) within the Park. As with anything in central London, this isn't a cheap option — you're looking at upwards of £115 per person per hour for lessons. 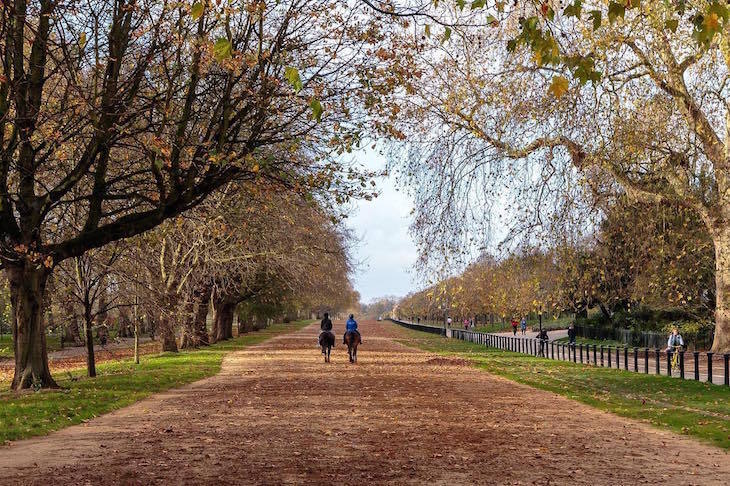 What a place to ride. Photo: Ross Nye Stables

You can't move for horses in this part of town. Round the corner — literally, about five doors down and across the cobbled street — from Hyde Park Stables is Ross Nye Stables. It's bizarre to walk down what looks like any other quaint residential road in west London knowing that behind the doors live horses, not people. Stabling was what the modern-day mews houses were originally used for, but we expect they make for some odd neigh-bours.

Anyway, Ross Nye Stables' lessons also take place in Hyde Park, on both the sand tracks skirting around the park's perimeter, and within the arenas. They also hold pony club days, jumping events, and an annual horse show.

Trot on up to Leyton (nearest station: Lea Bridge) and head for the building with the rather conspicuous horse statue on the roof — that'd be Lee Valley Riding Centre. This place is ideal for anyone who wants to dip their crop into the world of horse riding without fully committing; have-a-go sessions are available for adults, kids, or whole families, and if you decide to stick with your new hobby, you can choose between group or private lessons. There are also own-a-pony days, where younger riders can get involved with all aspects of horse care, as well as riding lessons for people with disabilities.

More replete with space than other schools on this list, the riding centre has an indoor arena and two outdoor arenas, as well as showjumping and cross country courses. 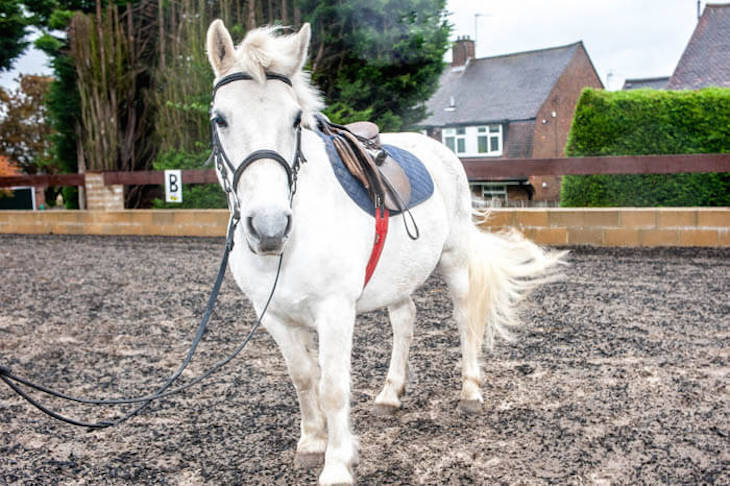 Casper, one of the horses at The London Equestrian Centre

Kiddies as young as three can get into the saddle at The London Equestrian Centre, which offers 15-minute  Tiny Tot rides. Once they turn four, they can join the private, semi-private or group lessons like anyone else (kids and adults), to improve their riding skills. Young horse fans can also join in with Pony Days, to learn more about grooming and equine care, as well as riding, and can even have birthday parties there. 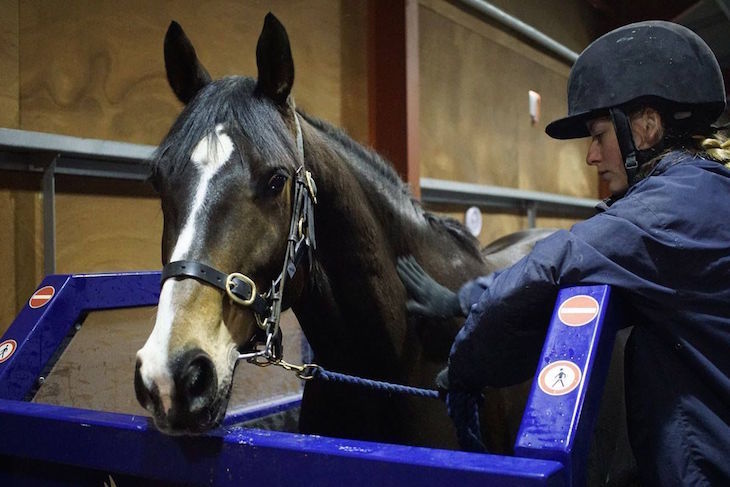 Right, so, have a seat while we explain this one. The Royal Borough of Greenwich Equestrian Centre is located  right on the Greenwich/Bexley borough boundary... and is operated by a college based in Hadlow, in the West Kent countryside, which itself comes under the North Kent College umbrella.

It's a complicated history of interwoven educational establishments, but what you need to know is that in addition to specialist equine management courses, the centre offers riding lessons to the public, from its very impressive facilities (which includes an equine spa, hydrotherapy pool and water treadmill... all for the horses, rather than their riders).

It's adults (14+) only for lessons and courses here, and options include private, semi-private and group lessons, from complete beginners upwards. If you take to it, membership is available (£40 a year) offering discounted lessons and priority booking. Lessons take place across the indoor arena and outdoor manège. 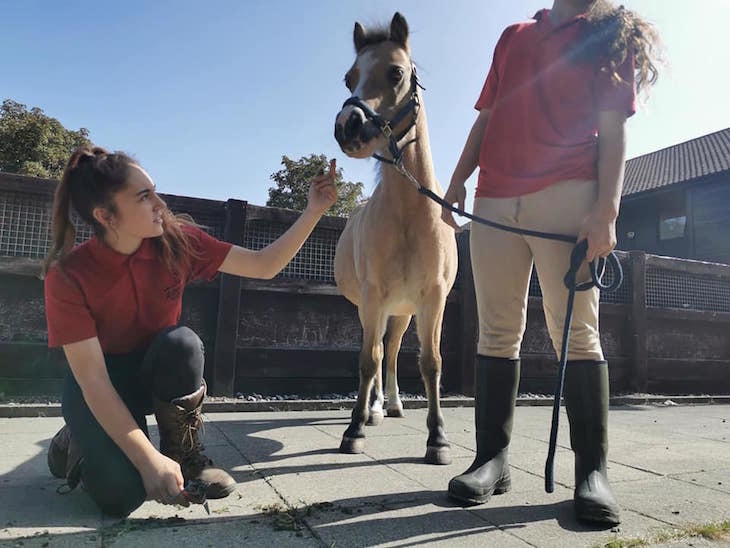 Under two miles from the City Airport runway is Docklands Equestrian Centre, a riding school with both indoor and outdoor facilities which welcomes both children and adults for riding lessons. Particular focus is on disabled riders — the centre is a member of the Riding for the Disabled charity, with specially trained and qualified staff — though able-bodied riders are just as welcome.

As a useful extra incentive, riders aged 12 and above can volunteer for tasks around the stables in exchange for points, which can be used towards future lessons. Ideal for teenagers who can start to pay their own way, and learn skills for future employment too. 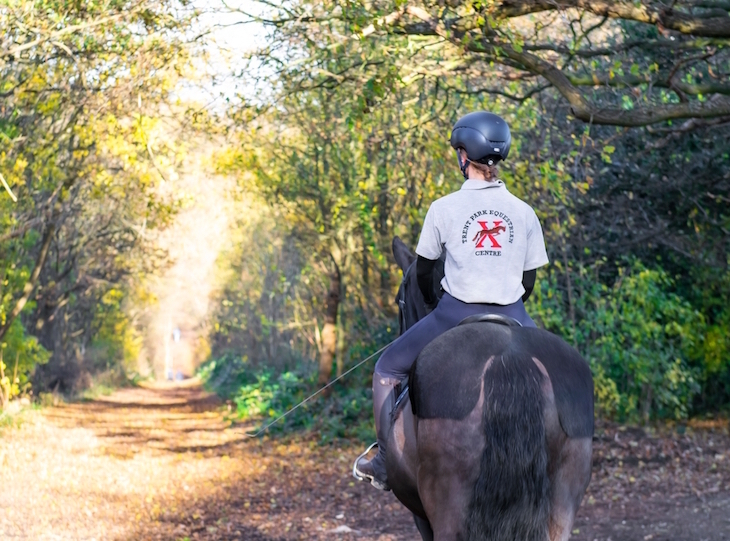 Just a few minute's walk from Oakwood tube station, Trent Park Equestrian Centre backs onto — you guessed it — Trent Park, though some of its rides go further afield than that.

But let's not get ahead of ourselves. Both private and group lessons are offered for children and adults who want to get into riding, or improve existing skills. Once you've mastered walk, trot and canter (and taken an assessment), you're able to join hacking rides which make use of the car-free bridleways in the local area. We rather like the sound of three-hour pub rides, which take place in the summer, venturing across fields and farmland before stopping at the King & Tinker pub, then heading back.

If you're not quite ready for a full hack, know that there's a cafe and restaurant on-site at the equestrian centre, for refuelling after your lesson. 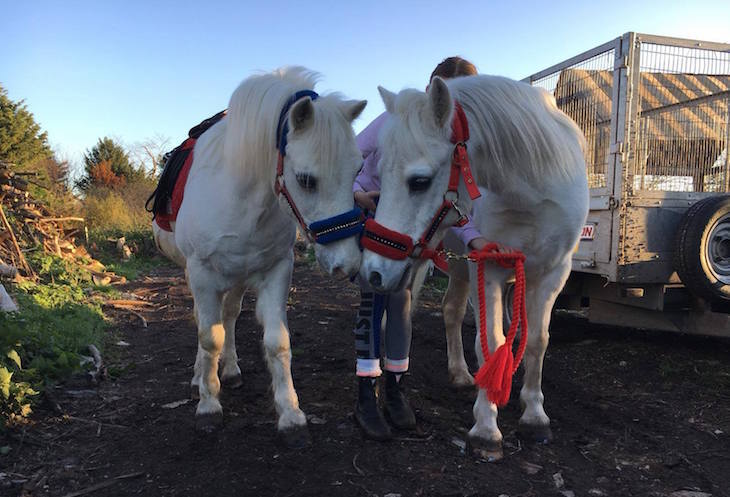 It'd be easier to tell you what Ealing Riding School doesn't do. Located, somewhat unexpectedly, on the residential Gunnersbury Avenue, stables and a stable yard, three schools (or arenas), a horse trek route, stable meadow, classroom, tack room and even a chicken coop and kitchen garden are all tucked away within the walled site between the houses and the railway line, home to around 30 horses at any one time.

Both private and group lessons are offered to both adults and kids, as well as pony club, pony parties, and after school riding club, school holiday courses and events, dressage and summer shows, a stable experience for young people who want to learn about equine care, and plenty more. There's very much an open-to-all policy, rather than the somewhat exclusive vibe you sometimes get at other riding facilities.

Oh, and they also offer free manure and compost to anyone who happens to be passing with an appropriate bag or container about their person. 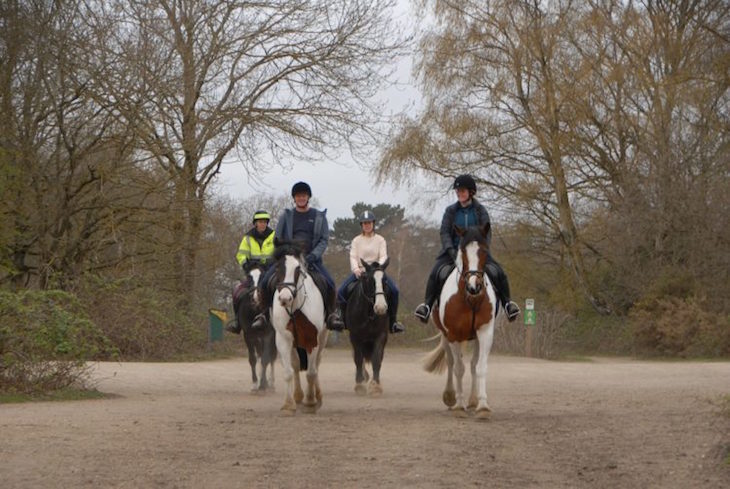 Though predominantly a members' club, Wimbledon Village Stables does offer some sessions for non-members, including private sessions, either in the arena, on riding tracks or out on Wimbledon Common, depending on experience level, though they can't currently offer these to beginners. There are horse simulator sessions for beginners, for anyone who wants to improve their technique (or just isn't ready for the real living, breathing thing yet). Nothing for children who are novice riders here, though. 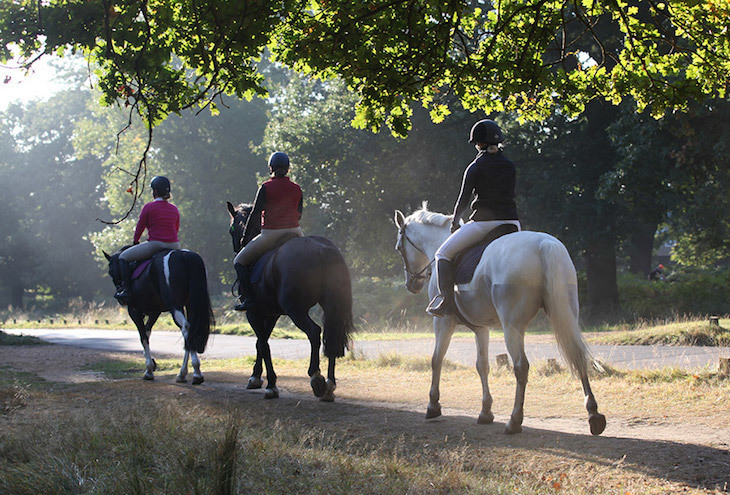 Split across two sites, Stag Lodge Stables is Richmond Park's riding centre, handily located by the green spaces of both Richmond Park and Wimbledon Common. Anyone age 4+ can ride here, taking advantage of seven arenas, 70+ horses, private and group lessons for children and adults, pony club, pony week courses and more. Probably the closest you'll get to a ride in the countryside while still being in London. 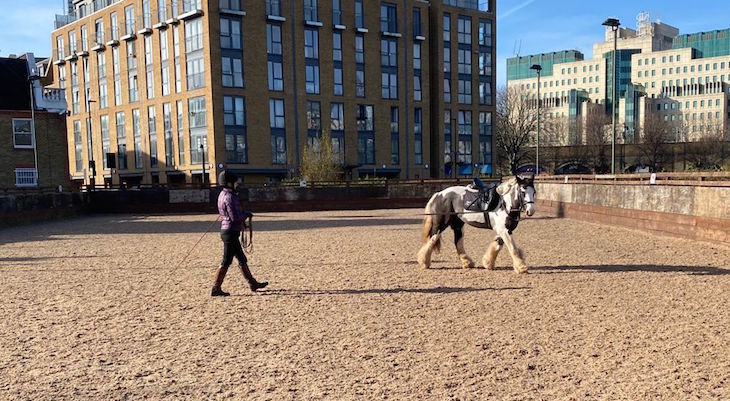 We usually think of smaller animals (rabbits, goats, the occasional pig) when we think of London's city farms, but many of them do have horses and ponies, which can be ridden. The following offer horse riding (with the added bonus of being able to visit the other animals before/after your ride):

Morden's Deen City Farm has a floodlit outdoor arena and a cross country course, and offers riding lessons for age 4+ on its 12 horses and ponies., as well as a riding simulator for anyone weighing over 11 stone. There are also guided pony rides for 2-7 year olds.

With the MI6 building as a backdrop, Vauxhall City Farm is home to a riding stables, complete with outdoor school where pony rides and lessons take place. They're currently still on pause after lockdown, but hope to restart in April 2022.

Currently closed awaiting a decision about its future. 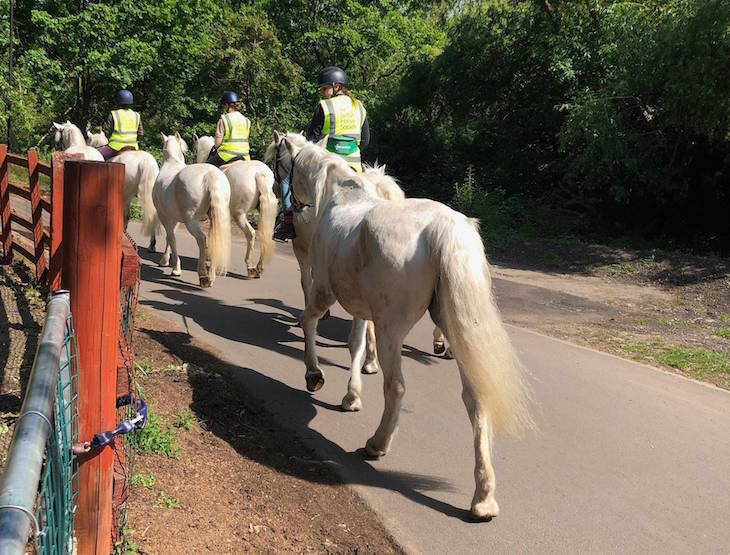 Between a prison, a hospital and a new railway super-hub is not where you'd expect to find 20 horses, but the Wormwood Scrubs Pony Centre has been here since 1989, and shows no signs of going anywhere. It's home to breeds including Arabian horses, and the Dancing White Horses, a performing team of rare, indigenous French Camargues.

The Centre itself runs as a charity, its prime aim to provide riding and equine therapy for children, specialising in those with special needs and physical disabilities. They do offer occasional lessons for able-bodied adults, primarily as way to fundraise for its other work — keep an eye on the website for current openings. 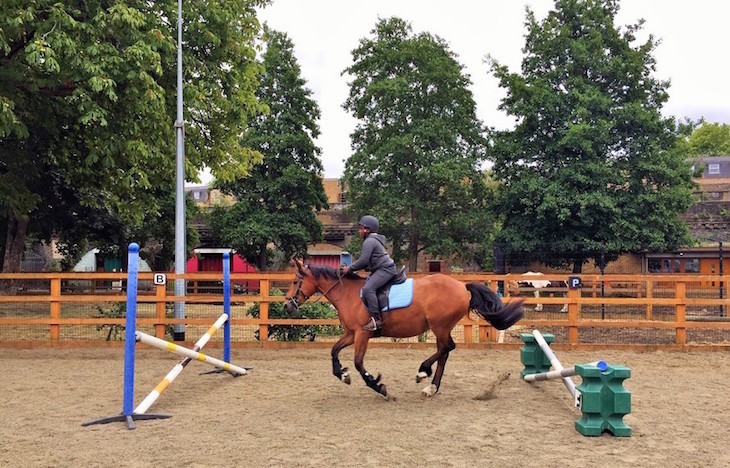 You may have heard of the unlikely riding stables in Brixton, located at the end of a residential street. That's Ebony Horse Club, which has been doing fantastic things to help local children and young people for several years now.

It operates as a charity, and allows children aged 8-18 to ride even if their families can't afford to pay for the lessons. Having something to look forward, a bond with the horses, and a potential career path all improves lives.

As a result of this great work, Ebony Horse Club isn't open to everyone. But if you know (or are) a young person from the local area who would benefit from their work, get in touch with them. Otherwise, consider getting involved as a volunteer or making a financial donation to help the charity's work.