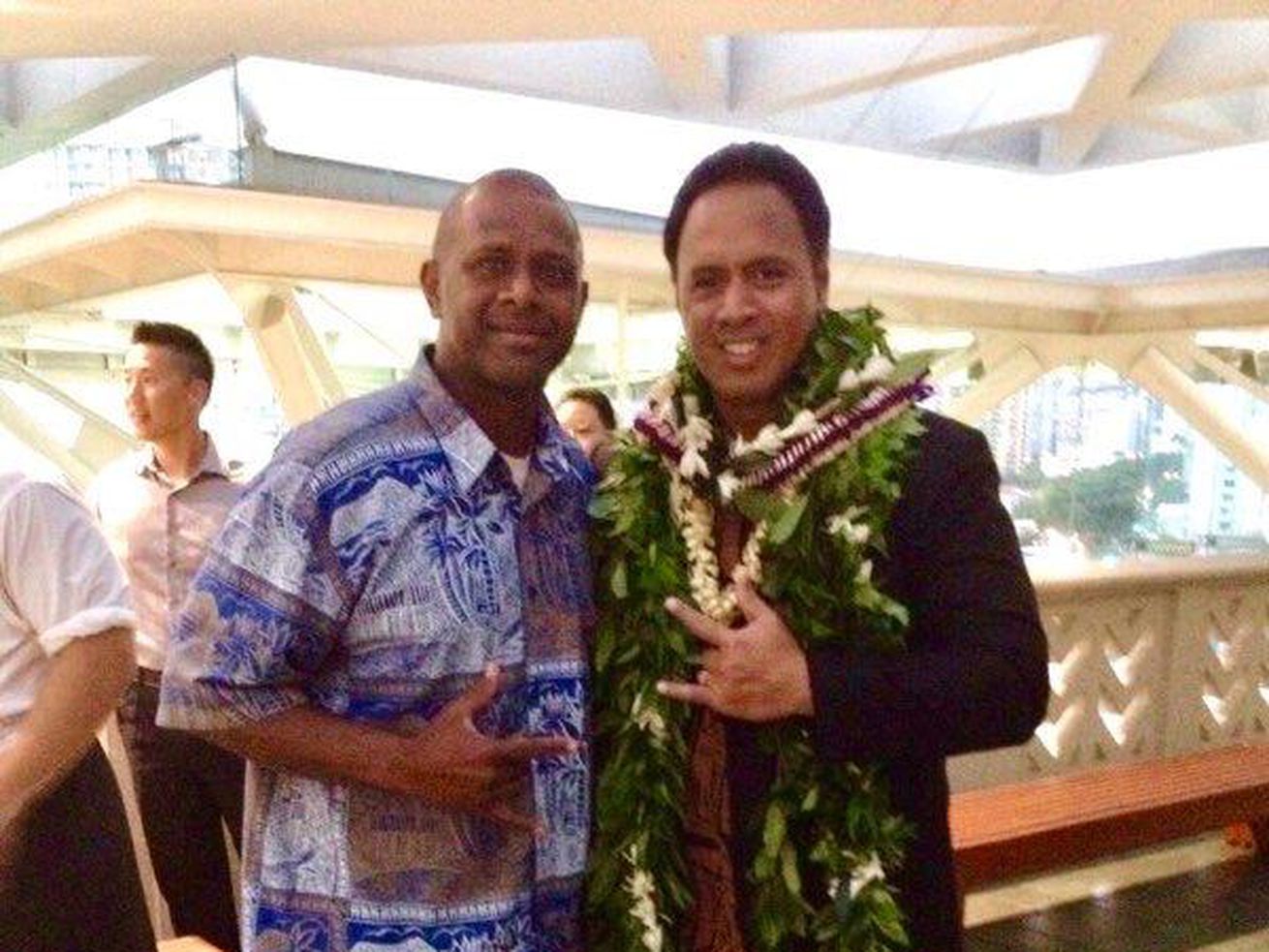 Jack Damuni, left, and Navy coach Ken Niumatalolo pose for a picture as the latter is inducted into the Polynesian Football Hall of Fame.

When Navy hosts BYU on national TV come Labor Day, the Navy head coach and BYU’s on-campus recruiting director — childhood friends while growing up on the North Shore of Oahu — will stand on opposite sidelines.

PROVO — Jack Damuni knows Navy coach Ken Niumatalolo so well he can watch a TV game, see the expression on his face, and know what emotion he’s feeling.

Damuni, BYU football’s executive director of on-campus recruiting and community player relations, and Niumatalolo, Navy’s most successful football coach, will reunite their lifetime friendship that began in the sixth grade on the North Shore of Oahu, Hawaii, when the Cougars travel to Navy for a Labor Day Monday night football game.

“He’s a very competitive guy and he simply hates to lose,” said Damuni. “Also, his team is very disciplined and I know they will fight to the very end. Even if his team is up by 20 points with minutes to play, Kenny will be coaching them hard.”

On the other hand, Damuni said BYU’s giant offensive line, quarterbacks and skill players remind him of the glory days of Cougars football. “The size of BYU’s linemen is impressive and Navy will have their hands full.”

Niumatalolo, a Samoan, and Damuni, a Fijian, grew up as neighbors in Laie, where a fence separated their houses. They were inseparable in junior high and high school, playing basketball and rugby, and were teammates on a youth community basketball team, the Bad Bullets.

Laie, Oahu, Hawaii, is an enclave of cultures, a community comprised largely of members of The Church of Jesus Christ of Latter-day Saints. Immigrants from all over the South Pacific and Asia go there for education or to be close to the church’s culture and the Laie temple. Many relatives settled there after going to college, working their way through school as performers or staff at the Polynesian Cultural Center. These include the parents of former BYU offensive coordinator Robert Anae and BYU head coach Kalani Sitake.

“We did everything together. He is one of my best friends. When he got the job at BYU, I was happy for him, coming in as a high school coach in Maui.” — Navy coach Ken Niumatalolo about his friend Jack Damuni

Niumatalolo’s father helped open and manage the restaurant at the Polynesian Cultural Center on the campus of BYU-Hawaii in the early 1970s after retiring from the U.S. Coast Guard. Damuni’s father helped open the center and helped organize the Fijian dances on display. As teens, Niumatalolo worked as a canoe boy at the popular tourist attraction while Damuni was a night dancer during the featured cultural shows.

“We did everything together,” said Niumatalolo. “He is one of my best friends. When he got the job at BYU, I was happy for him, coming in as a high school coach in Maui.”

While Damuni attended Kahuku High but didn’t play football until late in his high school career, Niumatalolo left Kahuku because coaches there wanted him to play on the offensive line. He went to another school in Honolulu, but when they asked him to play as a lineman, he left for Radford High, where he was a star quarterback and led Radford to a state championship. He later became a star QB for the University of Hawaii Rainbow Warriors.

Niumatalolo is a first cousin to former BYU star linebacker Thor Salanoa and their careers were during the same prep and college era, said Lominga Latu.

“Jack was our Bill Cosby,” said the elder Latu. “He was always cracking us up.”

Damuni was a front-row witness to Niumatalolo’s fierce competitive spirit when their respective Latter-day Saint wards played one another in a regional basketball tournament. That night, Danumi and Niumatalolo rode to the game in the same car. Niumatalolo drove.

With Damuni’s team trailing by a point in the final seconds, Damuni rose up and hit a shot just inside the half-court line for the game-winner. He was MVP of the game and received a cake as the prize. Niumatalolo was so upset about the loss, he got in his car and drove home without Damuni. “He knows I’m a poor sport,” laughed Niumatalolo this week.

“Later that night, Kenny came over to my house and we ate the cake together,” said Damuni. “We laughed and laughed and couldn’t stop laughing about it.”

“You could see the competitive fire come out in these guys,” said Lominga Latu. “They raised the level. They hated to lose.”

Their Bad Bullets coach was the late Pele Leiataua, who Latu said was 4-foot-something and the rest of the guys towered above him.

Although attending different high schools, Damuni never missed one of Niumatalolo’s football games in the city. They’d spend weekends together doing what kids do. That included sneaking into dances on BYU-Hawaii’s campus because they knew where the back doors were. Because they were tall young men, they were easily accepted as college freshmen and danced with the coeds. “That’s all I’m saying about that story,” said Niumatalolo.

“I always made sure I was at Ken’s house Saturday nights and slept on the living room floor,” said Damuni. “I had to because on Sundays his father was an unbelievable cook and would cook short ribs. Oh my gosh, they were so good! I never missed eating there Sundays.”

In the summers, the two friends often hung out at Laie Point, swam, went to the Naval Base and played basketball all day long. There wasn’t a day they didn’t look out for one another.

“We did stupid things kids do,” said Niumatalolo. “Like throwing balloons at the college students, getting into a little mischief.”

Latu said one of those times was during a showing of “Mary Poppins” in a campus auditorium. When the scene where Mary is in the park holding an umbrella and the rain came on, Ken, Jack, and some friends went in front of the screen and threw water balloons at the audience. They then went outside and from atop the McKay Building, threw more balloons, soaking some guys and their dates. “It was all in fun,” said Latu.

In Laie after 8 p.m., there was nothing to do, so kids entertained themselves. On one such occasion out on a street curb facing the temple, Damuni led the group in acting out TV commercials including the Coca-Cola commercial with “Mean” Joe Green. With Damuni acting the part of Green and the diminutive Leiataua acting the part of the kid, Damuni acted like he was leaving the tunnel of the stadium and Leiataua gave him a Coke. Turning, taking off his shirt/jersey as in the commercial, Damuni went to throw it to Leiataua, stopped, and took it back.

“I always made sure I was at Ken’s house Saturday nights and slept on the living room floor. I had to because on Sundays his father was an unbelievable cook and would cook short ribs. Oh my gosh, they were so good! I never missed eating there Sundays.” — Jack Damuni

“Everyone howled. We laughed until we cried. People came out of their houses and told us to be quiet and go home,” said Lominga Latu. “This is what you do in Laie at night.”

When it came time to make a decision to go on a two-year mission for The Church of Jesus Christ of Latter-day Saints, Damuni wavered, having a tough time with his decision.

“It was Ken and his girlfriend, now wife Barbara, who helped me work through that and make the decision to go. Ken told me, ‘You put the Lord first and he will take care of you.’” Damuni served in the Micronesia-Guam area of the South Pacific.

Damuni said he was once watching Navy against Army, and he saw on TV that Niumatalolo called a timeout. “Everyone wondered why he called a timeout, but I could see it coming because I could see it on his face, like he was inspired. I can read him like a book. Anyway, after the timeout, they ended up making the play to win the game. That is Ken all the way,” said Damuni.

Niumatalolo said it is unbelievable that he and his old friend will see one another across the sidelines. “All of us in Division I football coming from a very small town. It will be very cool.”

Come Monday night, Niumatalolo and Sitake will face one another. They are the first Samoan and Tongan coaches to coach major college football programs. Niumatalolo first got to know Sitake when Sitake coached with Kyle Whittingham at Utah.

But Damuni knew Sitake when he was a younger kid hanging around his father Tom who was a security guard at BYU-Hawaii. “Kalani was always with his dad,” said the BYU recruiter.

Damuni believes in his friend and that his Navy team will bring unbelievable discipline and desire to Monday’s game. The Cougars need to be ready every down.

On the other hand, he says BYU’s team has worked extremely hard. “They’ve been doing the right things. It’s a very close unit so I feel very good about our chances. Those linemen are huge and the receivers and quarterbacks are very good, just like the ones I watched growing up a BYU fan.”

Damuni, a former Cougars safety and nickel back, is an energetic dynamo for Sitake, active on social media and very outspoken. He is a driving force in the program, an advocate of his boss and his designs for helping young men and leading BYU to victory.

But he says as soon as the clock winds down to zero, regardless of who wins, Damuni will continue to be a fan of Navy because of Niumatalolo.

That’s what friends are for.