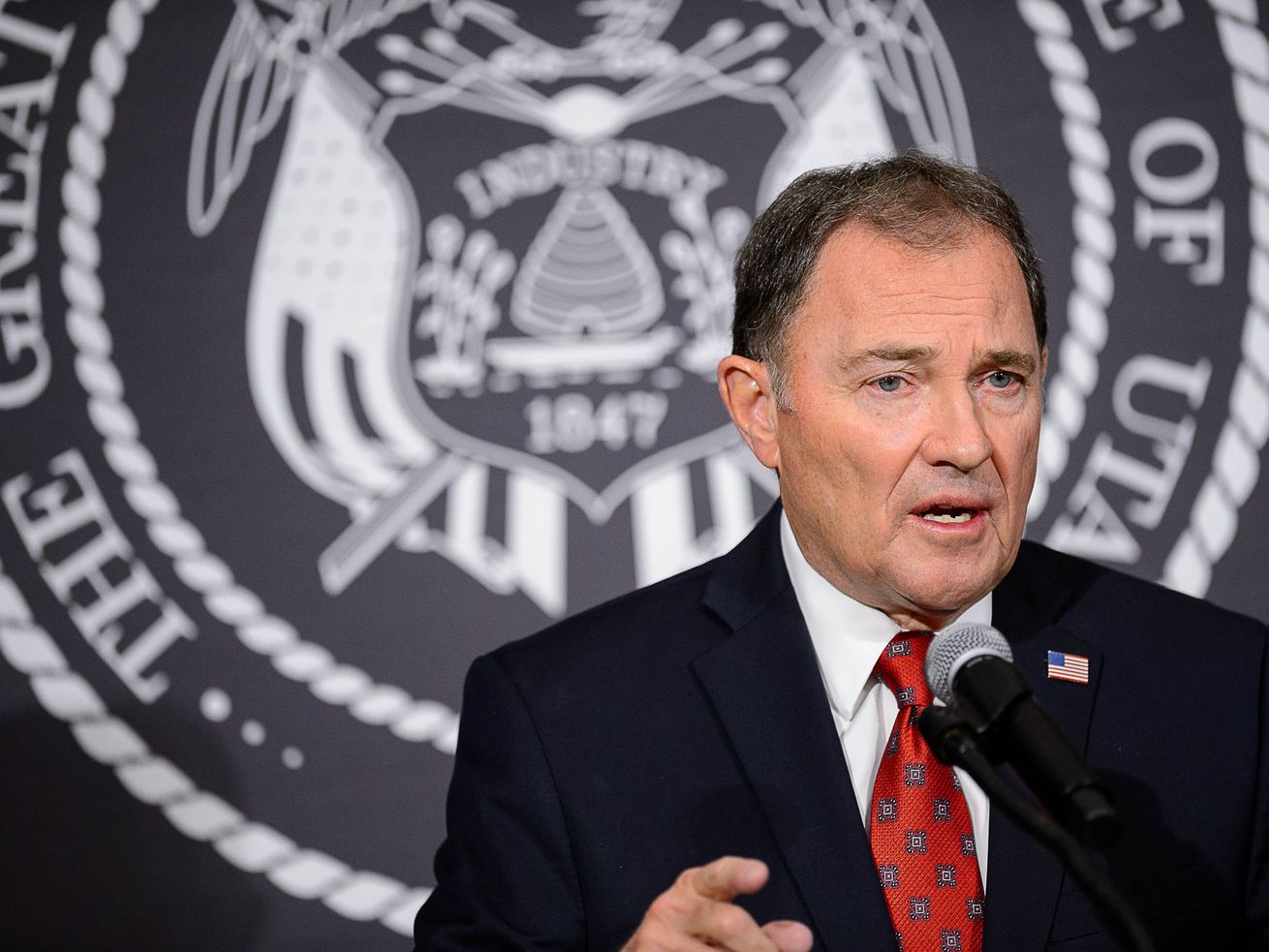 Gov. Gary Herbert speaks at the daily COVID-19 briefing at the Capitol in Salt Lake City on Thursday, May 7, 2020. | Trent Nelson

But Gov. Gary Herbert defends decisions made in ‘fog of war’

SALT LAKE CITY — Gov. Gary Herbert acknowledged Thursday that “legitimate” questions have been raised about the millions of dollars in contracts the state has signed to combat the coronavirus in Utah.

But he also defended the deals with public and private entities, including several tech companies, that he estimated have cost about $90 million so far, saying the state couldn’t wait on the federal government’s “slow and clumsy” response to the outbreak.

“I think it’s human nature for all of us to want to kind of Monday morning quarterback,” he said. “But given the constraints and the uncertainties of the moment and the urgencies that we faced at the time, I stand by the collective decisions that have been made by our state’s leaders.”

State officials have come under fire for entering into multimillion-dollar, no-bid, taxpayer-funded contracts with various companies to tackle the COVID-19 pandemic that has now claimed 61 lives in Utah.

Herbert said the deals were struck with the common goal to slow the spread of the virus, save lives and save livelihoods.

“There is no playbook on how to handle this. We’ve never faced this before,” Herbert said.

Among those deals was $800,000 for controversial anti-malarial drugs touted as treatment for the virus along with millions of dollars in other contracts now being audited by Utah State Auditor John Dougall.

Herbert said the state will cooperate with any “legitimate” inquiries to evaluate and learn from the decisions that were made.

“Let me be very clear that if, in fact, we find any instance of someone who’s engaged in some kind of fraud, price gouging or self-dealing with state resources, I will use the full weight of my office as the governor to make sure those people are held accountable,” he said.

In all, the state has made more than 300 purchases from 73 vendors, Herbert said. Most of the money, he said, came from the $1.2 billion the state received in federal coronavirus relief funds and must spend by the end of the year.

Nomi Health signed on to a $5 million-plus, no-bid contract, including $2 million for the creation of TestUtah.com, $3 million for the first month of five drive-thru testing locations and lab services, according to a copy of that contract obtained by the Deseret News from a public records request. Under that contract, Nomi also gets an additional $600,000 a month for each active testing location — which is now up to at least seven sites.

And emails and documents show Nomi Health was directly involved with the state’s purchase — which has since been refunded amid outcry — of $800,000 for 20,000 medication packs of hydroxychloroquine, chloroquine and zinc.

Nomi’s contract is just one that state officials have signed with tech companies to respond to the pandemic.

The state has also executed a $2 million contract with Domo, an American Fork analytics company, for IT services for TestUtah.com; and a $2.75 million contract with Twenty Labs for the Healthy Together app, which also requires the state to pay “out-of-pocket expenses (including reasonable legal costs)” and support fees of $300,000 a month for up to 1 million monthly active users, with each additional user costing another 30 cents per user per month, according to the contract.

The state also signed a contract with the University of Utah for field testing, at nearly $2.8 million per month for the first phase (or 12,500 participants) and $1.1 million per month for phase two (or 5,000 participants a month). The U. breaks down its test costs in the contract as $125 for running the extraction and COVID-19 test while TestUtah reports its costs for those procedures as $51.

The state of emergency Herbert declared in early March allows officials to bypass competitive bidding, which the governor said was necessary due to the urgency for procuring supplies and ramping up testing capacity.

Herbert said the unified command center under public safety Commissioner Jess Anderson now has full authority over the state’s response to the pandemic, including contracting. Any contracts that were executed outside the command will now come under its umbrella.

Because the pace of purchases have slowed down, the command center will use a more “normal” purchasing process, even though the state of emergency remains in place, the governor said.

Next week, Anderson will meet with the media to answer questions and provide “background and context” for the contracts the state has signed and what it will be doing in the future.

Herbert said state officials made thousands of individual decisions and judgment calls in the “fog of war.” Officials didn’t always agree and there were differences of opinion in some cases, he said. Also, he said there could have been better communication among state agencies.

“Was every decision the best decision? Probably not,” the governor said.