In a recent Everyday Grammar report, we explored phrasal expressions. Phrasal expressions are groups of words that take on a special meaning. This meaning is different from what the individual words suggest. Today we will explore three common, useful phrasal expressions. You will hear how people use them in everyday speech and in presentations, such as TED Talks. What are phrasal expressions? Phrasal expressions have somewhat unusual meanings. If you look up each individual word in the dictionary, you still might not understand them as a group. Here is an example. In our earlier report, we described the phrasal expression ‘by the way.’ ‘By the way’ means that the person speaking is going to introduce a new subject to a discussion. There are thousands of phrasal expressions in English.* In today’s report, we will explore the expressions so that, at all, and sort of. #1 so that Our first phrasal expression is ‘so that.’ ‘So that’ can be used in an explanation or to describe a purpose. It generally introduces a subordinate clause – a group of words with a subject and a verb. The subordinate clause plays a part in a longer sentence. Here is an example. Imagine you are explaining how to park a car on a very steep hill. Be sure to set the emergency brake so that the car does not roll away. The first part of the sentence – Be sure to set the emergency brake – is a complete sentence. The words ‘so that’ introduce a clause that explains or describes the purpose for setting the brake. Let’s listen to an example of how a speaker might use 'so that’ in a presentation. In this TED Talk, Sara-Jane Dunn talks about programming cells. “And then those programs must operate in a distributed way across individual cells, so that they can coordinate and that plant can grow and flourish.”   #2 at all Our second phrasal expression is ‘at all.’ ‘At all’ means to any extent or in any way. It can make statements stronger. It acts like an adverb in the sentence. Unlike ‘so that,’ ‘at all’ does not introduce a clause. English speakers mostly use it in the middle or at the end of a sentence. Here is an example. Tom came to dinner last night, but he didn’t eat at all! He must have been worried about something. The reason the speaker used ‘at all’ is to highlight that Tom did not eat. ‘At all’ makes the statement stronger. ‘At all’ is common in speaking and writing. Let’s listen to how Amy Padnani, an editor at the New York Times, uses ‘at all’ in a 2019 TED Talk. “There were moments when I faced great self-doubt. I wondered if I was crazy or if I was all alone, and if I should just give up. When I’ve seen the reaction to this project, I know I’m not at all alone.”    #3 sort of Our third phrasal expression is ‘sort of.’ ‘Sort of’ means in some way or to some extent. Unlike our other phrasal expressions, ‘sort of’ is informal. ‘Sort of’ is used in everyday speech. You will generally not see it in writing. ‘Sort of’ can stand alone as a statement, as in: Do you agree with that? Sort of... ‘Sort of’ can also appear in a longer sentence, as in: She was sort of nice. You might hear Americans reduce 'sort of' to something that sounds like 'sorta.' Let’s listen to how a speaker uses ‘sort of’ in a presentation. In this example, Jon M. Chu talks about filmmaking. Listen to how he uses ‘sort of’ as a kind of adverb. "You can plan, you can write scripts, you can do your storyboards, but at a certain point, your movie will speak back to you, and it’s your job to listen. It’s this living organism and it sort of presents itself, so you better catch it before it slips through your hands..."   Closing thoughts You have learned about three common phrasal expressions. Now be sure to practice using them whenever you can. Look and listen for other phrasal expressions and keep a record of your findings. With time, and practice, you will use more and more phrasal expressions with ease.  I'm Ashley Thompson. And I'm John Russell.    John Russell wrote this story for Learning English. Caty Weaver was the editor. *"Phrasal expression" is an umbrella term that covers many kinds of phrases, phrasal verbs, etc.  ______________________________________________________________   Words in This Story   steep – adj. going up or down very quickly distribute – v. to divide (something) among the members of a group — usually + between or among — often used as (be/get) distributed coordinate – v. to act or work together properly and well script – n. the written form of a play, movie, television show, etc. storyboard – n. a series of drawings or pictures that show the changes of scenes and actions for a movie, television show, etc. 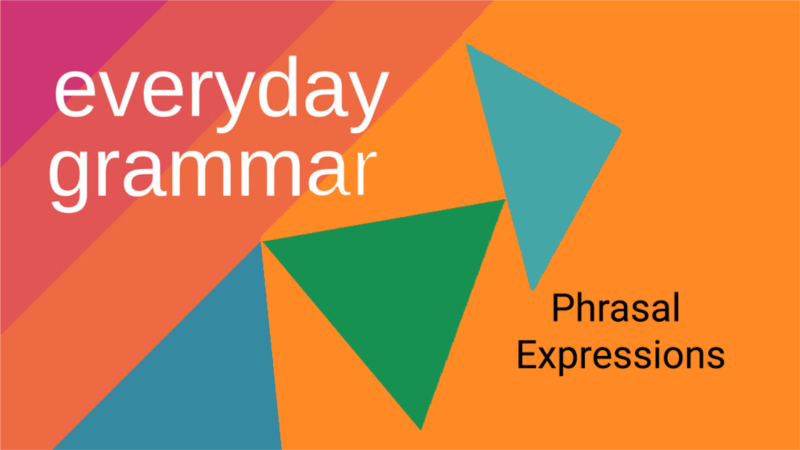