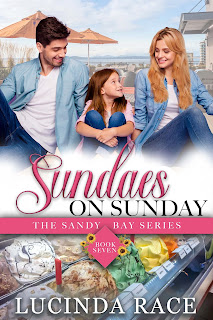 Although her husband died a year ago, first grade school teacher Lisa Peck is keeping one tradition she shared with him: sundaes every Sunday at their special place, Seaside Scoops. It’s there that she meets a precocious five-year-old, Allie, and her handsome, dark-haired father, Hunter.

Airline pilot Hunter Adams has been a single dad since his wife died when Allie was a baby. He has his life perfectly arranged. Allie stays with her grandparents during the week while he flies, then he spends weekends with his daughter, including taking her for sweet treats at Seaside Scoops. But Allie has never before been drawn to someone as quickly as she’s drawn to Lisa. Is it just a little girl interested in a pretty woman, or is it fate pulling Lisa and Hunter together?

Lisa is cautious, but maybe it’s time to move on from the past and take a second chance on love. Everyone is encouraging Hunter to do the same, but will Lisa think he’s just trying to find a mother for his child? Maybe Allie is wiser than the adults in her life. Will their sundaes on Sunday lead to true love every day of the week?

Lisa sat alone at a table for two. Seaside Scoops had been their special place every week for the last four years where they could relax and gear up for the week ahead. She smiled in spite of her sadness when she thought of what Brian used to call their standing date, sundaes on Sunday. A year ago, he would have been sitting across from her in the quaint seaside town, wearing a silly grin with a dab of whipped cream on his nose, all in an attempt to make her laugh. It was corny but what she wouldn’t give to see it one more time.

The last time they had been there he’d had a hot fudge on coffee. It’s funny how some things just stick. Like the fact he always took her cherry since she hated them and he loved them which is why she always ordered one. It was one of the small ways they fit together like two halves of a whole.

She looked across the narrow strip of sand to the Atlantic Ocean. Traffic was almost nonexistent on this early Sunday afternoon. The mid-spring sun was warm without the need for the pink and white umbrella to be raised. Few people were sitting outside; tourists hadn’t started to show up yet, but it was just a matter of time, and then she’d adjust to coming just before dinner—that too had been Brian’s suggestion.

As she spooned the last of the now-melted strawberry ice cream from the silver dish, she noticed a man and a little girl sitting two tables over. She was wearing a sweet yellow jumper and a white shirt with bright-red Mary Jane shoes. She couldn’t have been older than four if Lisa had to guess. She was younger than her first-grade students.

Her sweet voice caught Lisa’s attention; it held a soft Southern drawl. “Daddy, how come we can’t have ice cream every day? It’s so good. I really like strawberry ice cream the best, even better than hot dogs.” She looked up at him with big cornflower-blue eyes and her medium-length dark hair was pulled to the side of her face with a butterfly barrette. She was adorable but looked nothing like her dad except her deep dimples; she must favor her mother.

Her father smothered a chuckle. “Ice cream is a treat, Allie, which is why we have it on the weekend.”

He lifted his eyes and gave Lisa a smile and half nod. She quickly looked away, embarrassed to be caught eavesdropping. If only her life had turned out differently.

A short time later the dad wiped his daughter’s hands on a napkin as best he could and placed the dishes in the container on the metal stand. Lisa held an open book in her hand but wasn’t reading it. Instead, her eyes were closed as she listened to the soothing sound of the waves crashing on the shore.

“Daddy?” Allie whispered loudly. “Do you think the pretty lady is sleeping?”

Lisa opened her eyes and gave her a small smile. “No. I’m listening to the ocean.”

Her mouth dropped open, and then she walked over to where Lisa was sitting and climbed onto a chair next to her as if they had known each other forever.

Her dad said, “Allie, let’s leave the lady alone; she seems to be enjoying her day.”

Lisa’s heart cracked a little. Every Sunday was the same, as if on repeat like an old movie. “I’d like the company if it’s okay with you.”

He pulled out a chair. Taking his daughter’s hand, he relented. “Just for a minute, and then we need to go.”

She couldn’t help but notice his soft-brown eyes and thick dark hair, cut short for what she guessed was ease of maintenance. He wore khaki shorts and a faded blue tee and flip-flops. Sitting across from her, he was taller by a full foot. But it was his warm smile that made her heart rate tick up in an unexpected way.

She held out her hand to the child. “I’m Lisa Peck.” Her eyes drifted to the dad.

He gave her another warm smile. “Hunter Adams, father to a very precocious daughter.”

“It’s nice to meet you both.” She focused her attention on Allie. “Close your eyes and really think about listening to all the sounds around you. I’ll bet you can hear the waves crashing on the shoreline.”

She immediately closed her eyes and her dark lashes fluttered over her cheeks, so sweet and trusting.

“Tell me what you hear.”

Her eyes popped open, and she said, “You talking.”

Allie tipped her head. “You too, Daddy. You wanna hear the waves, right?”

He was still holding her hand. “I do but don’t let go of my hand, okay?”

Lisa set the book down and folded her hands in her lap. “I’m closing my eyes now.”

They sat there quietly and the waves continued their steady rhythm of kissing the shore and slipping away.

Lisa opened her eyes and was surprised to see Hunter watching her.

“Can we go see the ocean, pretty please?”

Her big blue eyes were open wide and if she were Lisa’s daughter, it would be tough to say no. But Hunter must be used to it.

“How about we agree to walk along the sidewalk on the way to the car and we can see the waves. I wouldn’t want you to get your pretty dress all sandy before we get to Grandma’s house.”

She looked down and nodded. “I can’t get my Dorothy shoes dirty.”

Hunter leaned across the table. With a conspiratorial wink, he said, “Dorothy from The Wizard of Oz.”

“I see.” She gave Allie a smile. “You look very pretty to go see your grandmother.”

“Thanks for indulging her.” He scooped up Allie in one arm. “It was nice meeting you.”

Hunter left the ice cream shop and as promised, he carried Allie across the narrow two-lane road to the sidewalk.

She raced to the rail and climbed up on it. “Look, Daddy. The waves are huge. Can we play on the beach today?”

“Not today, peanut, but someday soon we can.” He looked over his shoulder but he couldn’t see Lisa from this vantage point. She had looked isolated; that was the only way he could think to describe it until Allie interrupted her day.

She had a sixth sense when someone needed to be comforted. It had been like that from the time she was little, long after her mom had died. Allie didn’t have any memories of Judith even though she had a framed photo of her mom next to her princess bed.

After a few more minutes, he said, “Ready to go to Grandma’s?”

“How many days before you come home?”

He held up two fingers. “We’ll mark it on the calendar, okay? It’s just two overnights at Grandma’s this time.”

He loved being a pilot. It had been his passion for fifteen years, but he hated leaving his little girl. What choice did he have unless he wanted to step out of the cockpit permanently and train for a different position within the airline industry? But giving up seniority was tough to swallow and it had its perks. He liked flying in and out of Logan and it had a more flexible schedule along with making an excellent living. It had been especially tough when Judith got sick, but the cancer took her quickly. It wasn’t like he had time to adjust to being a single parent. She made it look easy, taking care of Allie while he jetted off to the next city, state, or even country. Moving back to the Northeast had been the right thing for both of them.

“Daddy, I don’t want a trip gift this time.”

He smiled. “You don’t want me to bring home a little something?”

She shook her head. “Nope, just you.”

That melted his heart. “I promise I’ll be home as fast as I can.”

She put her tiny hand in his. “That lady was pretty.”

“The lady eating ice cream. I wonder where her little kids were.”

“I don’t know, honey. Maybe she doesn’t have any.”

“I bet if she has kids we could play together. She was nice.” Allie frowned. “We should have asked her to come see the waves with us.”

“I’m sure she had other things to do.”

Allie looked up. “Daddy, she was taking a nap.”

He laughed softly. “She was enjoying her afternoon and there is nothing wrong with relaxing after a busy week.”

She squinted her eyes and tipped up her chin. “How do you know she was busy?”

“Most adults are; it’s just how we roll.” He scooped her up and tickled her until she squealed, causing a flock of seagulls to take flight.

Buy Links (including Goodreads and BookBub) 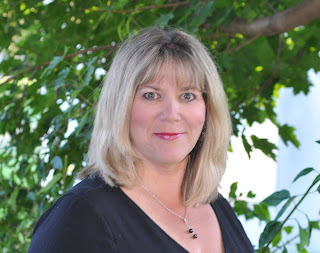 Award-winning and best-selling author Lucinda Race is a lifelong fan of romantic fiction. As a young girl, she spent hours reading romance novels and getting lost in the hope they represent. While her friends dreamed of becoming doctors and engineers, her dreams were to become a writer—a romance novelist.

As life twisted and turned, she found herself writing nonfiction but longed to turn to her true passion. After developing the storyline for The Loudon Series, it was time to start living her dream. Her fingers practically fly over computer keys she weaves stories about strong women and the men who love them.   Lucinda lives with her two little dogs, a miniature long hair dachshund and a shitzu mix rescue, in the rolling hills of western Massachusetts. When she's not at her day job, she’s immersed in her fictional worlds. And if she’s not writing romance novels, she’s reading everything she can get her hands on.