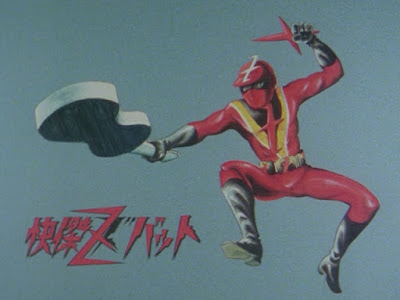 While the legendary mangaka Shotaro Ishinomori is best known in the world of tokusatsu for the likes of Kamen Rider and Super Sentai, his creativity was stamped all over a number of shows produced by Toei in the 1970s and 80s. Among his more popular superhero entries is Kaiketsu Zubat ("The Magnificent Zubat"), a 1977 series that ran for a total of 32 episodes. The series stars Hiroshi Miayauchi in the lead role, a legend in the world of henshin heroes but arguably best known for his roles as Shiro Kazami/Kamen Rider V3 and Sokichi Banba/Big One in JAKQ Dengekitai. A rather unique series that rejects some of the more traditional henshin hero tropes in favour of modern Western/detective flavour, it initially received high audience ratings but poor toy sales led to the loss of its sponsor (and in turn, early termination at 32 episodes). Though the show has never been revived in any form, modern fans may be more familiar with the cameo he made in OOO, Den-O, All Riders: Let's Go Kamen Riders, where he appeared alongside fellow Ishinomori heroes Kikaider, Kikaider 01 and Inazuman to defeat General Shadow. 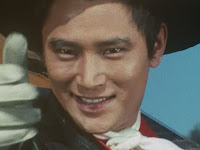 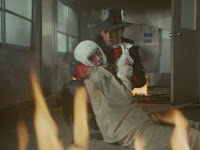 When his best friend Goro Asuka is gunned down by a mysterious assailant, private detective Ken Hayakawa swears vengeance. Travelling from place to place, Ken encounters the various criminal organisations causing chaos in Japan, as well as the various hitmen and bodyguards they employ. No matter how specific they're skills may be, one thing is guaranteed. Those criminals are only second best in Japan - second to Hayakawa himself!
Donning a red suit hidden within his guitar, Hayakawa becomes the Magnificent Zubat - the mysterious hero all criminals come to fear. The Zubat suit, Goro's final scientific creation, grants its user enhanced strength and durability for up to five minutes - any longer and it won't just leave them vulnerable, it could potentially kill them. With every criminal organisation he brings down, Hayakawa gets one step closer to identifying Goro's killer. 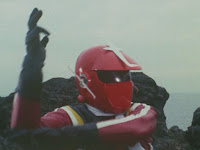 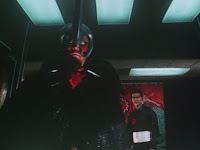 While Hiroshi Miyauchi may be more well-known among fans for his roles in Kamen Rider and Super Sentai, arguably no show defines him as a tokusatsu powerhouse as much as Kaiketsu Zubat. It's no exaggeration to say that Ken Hayakawa may be one of the greatest tokusatsu heroes ever, and it's all thanks to Miyauchi. An all-round renaissance man with charm, with, his own infectious intro music and a fashion sense to die for, Hayakawa swaggers onto the scene to remind the bad guys just who's the best. The best at what? Well just about everything. The show's most memorable trait is that after identifying his latest opponent and acknowledging their skills, Hayakawa will announce to them that they are only the second best in Japan. When questioned who is better, Hayakawa tips his hat, whistles and points to himself in a move that could easily rival any superhero transformation pose. Following that Hayakawa is invited to prove his claim in a head to head face off, with Hayakawa emerging the victor after one-upping his opponent's own over the top showmanship. No matter how repetitive or predictable these scenes get, they never stop being the show's best moments. Yet at the same time behind this cocky exterior lies a more familiar superhero trope of the era, a brooding wanderer driven by vengeance. One episode in particular also adds a much more tragic side to the character, briefly reuniting him with his estranged mother. Miyauchi's performance walks the balance between these two sides of Haykawa perfectly, his charming demeanour often masking how cold he can actually be. He has the traits of a brooding badass, but also a loveable confidence and a sense that he'd actually be a lot of fun to be around. The most important to think to remember though is no matter how good at something you think you are, as long as you're in Japan you'll always be second best to him.

The reason Hayakawa's brilliance works so well in the context of the story is because he is never shown as perfect. While the scenes of him repeatedly outclassing the hitmen of the week at their own specialities show just how skilled he is, rarely do these abilities ever actually go on to save him or prove of any real benefit in the episodes themselves. Instead they're simply moments of pure fun, highlighting Zubat's distinct sense of absurdity whilst making its lead character all the more loveable. Furthermore Hayakawa may constantly seem one step ahead of the villains but he's not totally adverse to making mistakes, and occasionally his fake out deaths (quickly followed by his reappearance on the scene as Zubat) are close shaves as opposed to theatrics. His biggest blind spot however is anything that he believes will bring him closer to identifying Goro's killer, with Hayakawa repeatedly shown to initially believe whatever "evidence" is presented in front of him without question. It helps makes Hayakawa a far more nuanced character without detracting from his rather extensive skillset, perfectly balancing the tortured persona of the archetype Showa tokusatsu hero with the silliness that makes Kaiketsu Zubat so charming. 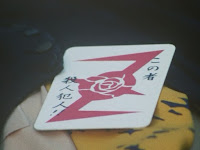 As previously mentioned this show is notable as it doesn't feature monster characters or supernatural forces like so many other henshin hero shows of the time did. Instead Kaiketsu Zubat draws from even older shows such as Moonlight Mask, presenting Zubat more as a costumed vigilante that solely battles against criminal organisations and human enemies. That alone might make the show sound considerably more grounded than its peers, but rest assured this is often far from the case – it still starts a red jumpsuited hero that drives a flying car after all. Facing off against the likes of Kid the Pirate, Dandy Harry or Uri Kellar, Kaiketsu Zubat's hitmen are a menagerie of villainy with some really weird skill sets. One hitman might be something as simple as the (second) best swordsman in all of Japan, while another is what you get when a common magician turns to crime. So in essence the "monster of the week" format so many of these shows follow remains completely unchanged, and if anything is all the weirder for the fact that there aren't any superpowers, mutations or cyborgs involved. It's a superhero show that perfectly combines what was popular at the time with both noir detective and Western cowboy elements, resulting in something that's able to sit comfortably alongside other henshin hero shows but stand out from them at the same time.

Of course the problem in the show being so focused on Hayakawa is that its extended cast often suffers considerably. Given that there are less than a handful of recurring characters, it's amazing how much the story often seems to completely forget they even exist. Hayakawa's main support in the show is arguably Shingo Tōjō, the chief of the Metropolitan police who doesn't always agree with his maverick ways but supports Hayakawa where he can and is also one of the only people who knows he's Zubat. For the most part Tōjō's role in the series tends to be arriving at the scene following the villain's defeat, reading out the calling card left by the masked hero and wondering where Hayakawa will end up next. But on occasion we'll also see Tōjō get mixed up in Hayakawa's affairs – or to be more specific vice versa, with Ken getting in the way of various sting operations. Even in these episodes its rare to get any real focus on Tōjō, but the dynamic of the show is much more interesting when it's highlighting the different approaches the two detectives have. Not faring anywhere near as well are Goro's sister Midori and Osamu, a child who idolises Hayakawa. The pair spend the early episodes of the series following Hayakawa around on his quest. That is until the show just seems to completely forget they exist and drop them from the story entirely until they randomly show up again for the finale. 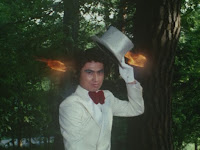 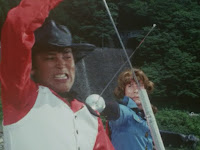 Thankfully the show has a lot more fun with its villains. A standard episode will see Hayakawa encounter a different gang, each with the own regional boss as well as their hitman who is quickly shown up in their specialist field. While the characters themselves might not be all that memorable, a good gimmick goes a long way and the various contests they have with Hayakawa are the perfect means for both laughs and a good impression. Sadly there isn't a whole lot in the way of continuity (Dakker's chief Leader L being the only link between the varying organisations, and even the show throws out a last minute twist when Zubat has finally chased him down), but the idea of all these regional crime gangs brought under an umbrella of evil works really well for the show's spin on its villains. Anyone with prior experience of tokusatsu shows from this era will be all to familiar with the kind of nefarious plots they get up to, which ran range from simple racketeering and drug dealing all the way to more outlandish schemes such as stealing scientific breakthroughs or germ warfare. Episode 10 even features a fantastic cameo from Ishinomori himself as a baseball player targeted by Dakker.
The other thing that can often let Kaiketsu Zubat down is just how formulaic it is. Admittedly this is true of the more episodic story telling of all tokusatsu superhero shows from this era, but even then there will often be moments peppered in designed to shake up the status quo somewhat. Kaiketsu Zubat however remains the same pretty much from start to finish, with the stories very clearly fitted around this template. Someone will be in trouble, Hayakawa shows up to identify and embarrass the villains, shenanigans ensue and then Hayakawa will be "beaten", only to reappear and save the day as Zubat. As wildly entertaining as the show may be, the formula of the show is down to such a fine art that even the timings between episodes feel the same. This might be due to 30 out of the show's 32 episodes being entirely written by the same person (Shukei Nagasaka), leaving no room whatsoever for any individual writer's flair. Many will argue that classic shows like this were specifically designed for weekly viewing and thus not suited to binge-watching, and while this isn't always necessarily the case it is definitely true of Kaiketsu Zubat. Not just because the episodes will quickly begin to blend into each other, but also because at 32 episodes long the show actually feels shorter than you'd think. 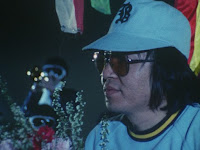 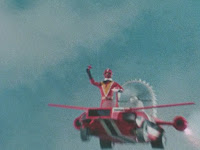 Ultimately Kaiketsu Zubat may be the Hiroshi Miyauchi show, but given just how legendary the actor is that certainly isn't a bad thing to be. As much a wacky sci-fi cowboy detective show as it is about a costumed superhero, Kaiketsu Zubat is less the straight-faced show its synopsis suggests and more the kind of utter craziness that only tokusatsu can deliver. One might think a show that doesn't feature any monsters might be a little more grounded, but I guarantee you that it is often very much the opposite. While the Magnificent Zubat may have never returned in the same way many of Shotaro Ishinomori's other most notable heroes have, the show is just as brilliant now as it was back in 1977 and above all else truly illustrates just how much of a treasure Miyauchi is.

Study Hotels opens on University of Chicago campus
May 20, 2022