You didn’t think Amazon couldn’t get any bigger than it already is now, right? Well, the online retail giant is expanding its reach with news today that it will be acquiring robot vacuum maker iRobot, the company that makes Roomba vacuums. This acquisition will give Amazon the lion’s share of the lucrative robot vacuum market space. Already, the term “Roomba” is used as a stand-in for all robot vacuums.

This strategy of acquiring established companies isn’t new for Amazon. Ring, Eero, and Blink are some of Amazon’s most popular subsidiaries, and the company’s gravitational pull is inescapable in the smart home market. Already, most smart home products tout how well they work with Alexa, the Amazon voice assistant. This new deal between Amazon and iRobot is no doubt monumental, but it still needs to pass regulatory approval before it’s finalized.

Amazon will snatch up iRobot for $61 per share, a price that yields a valuation of about $1.7 billion. In a press release, Amazon spokespeople said that the company has long valued what iRobot has done in the cleaning space, and Roombas have long been popular products among Amazon customers.

“Customers love iRobot products—and I’m excited to work with the iRobot team to invent in ways that make customers’ lives easier and more enjoyable,” said Dave Limp, SVP of Amazon Devices. That’s a sentiment shared by iRobot chairman and CEO, Colin Angle, who is equally excited about the new opportunity with Amazon. “Amazon shares our passion for building thoughtful innovations that empower people to do more at home, and I cannot think of a better place for our team to continue our mission,” Colin explained.

We’ll have to wait and see if the acquisition pans out, but here’s what it could mean for the future of household robots, the robot vacuum arms race, and the smart home.

Home Robots That Can Actually Get Around

Roombas have an exceptional reputation when it comes to vacuuming, and the best Roombas offer an affordable entry point to the robot vacuum market. iRobot has also made considerable advances in the last several years in terms of navigation. We wouldn’t be surprised if Amazon wants to leverage iRobot’s SLAM (Simultaneous Localisation and Mapping) technology to refine how future home robots  move around the home and avoid pesky obstacles.

The Amazon Astro home robot was one of the coolest tech gadgets when it was introduced ten months ago, largely in part because it was an actual Alexa-powered robot that could help out around the home and what’s going on when no one’s home. A security robot that can’t navigate past a simple wire on the floor would be pretty useless.

SLAM technology has allowed iRobot’s Roombas to effectively map out rooms and avoid obstacles, and the best Roomba vacuums have seriously impressive navigation. Therefore, it would make sense to see this technology adapted to further enhance Amazon’s current and future home robots. We’re at the cusp of home robots becoming a real, viable reality, and these bots are poised to change the way we think of home security. 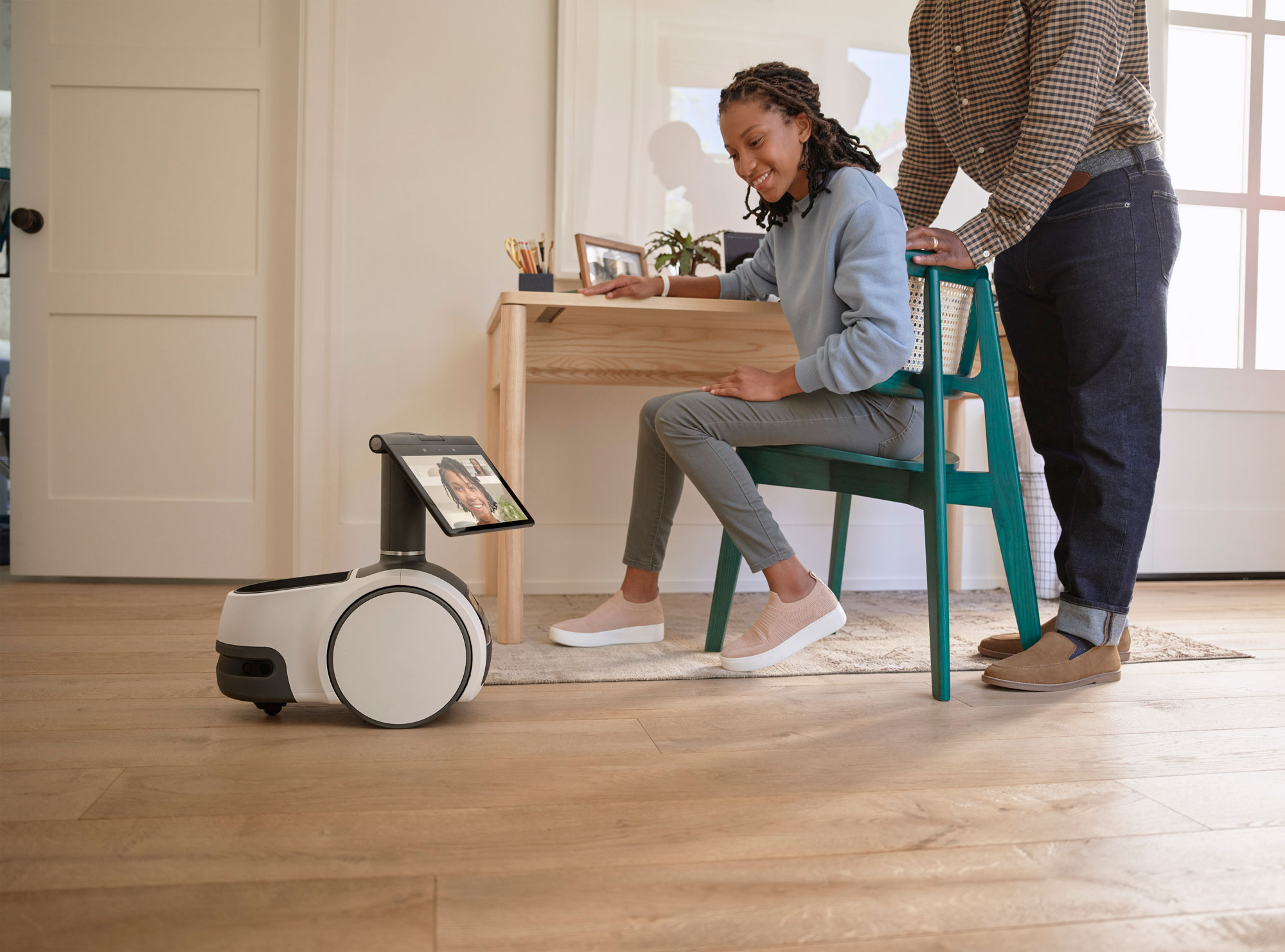 Speaking of home security, you can’t deny that Amazon already has a huge piece of the pie already. Instead of using expensive local contractors to install complicated security systems, homeowner can now set up their own smart security systems with easy-to-install products. Not only are Ring and Blink subsidiaries of Amazon, but there are also home security services such as Ring Protect and Alexa Guard that are under the Amazon umbrella. In addition, programs like Alexa Together can help you keep an eye on aging family members.

Sure, we already have bots with built-in cameras that roam around the home sniffing out potential threats, like Samsung’s Jet Bot AI+, but we could very well have something similar with Roombas. Cameras are currently in use with a few Roombas, however, they simply are there to help with navigation and obstacle avoidance — not for monitoring for motion detection.

Beyond just the potential of a home security Roomba, perhaps an Amazon Astro-like home robot that could also vacuum and mop, it could be integrated with Alexa Guard to provide even more security when there are other Alexa smart speakers or smart displays in the home. Just think, if your Amazon Echo speakers hears the sound of glass breaking in a room, this Roomba home robot could instantly investigate when no one is around.

A screenshot of the Ecovacs Deebot X1 camera system.

Out of all the categories that make up the smart home, Amazon didn’t have any part of the robot vacuum space prior to this unexpected announcement. But now, it seems as though the company will have greater influence in the broader smart home space.

This will naturally force competitors to keep pace. Brands such as Roborock, Ecovacs, and Shark Ninja have found success with their line of robot vacuums, so it’ll be interesting to see how these companies adapt to the challenge once iRobot is fully absorbed by Amazon.

We are personally excited most about convergent smart home devices. You know, the kind that has more than one function. Take for example the Amazon Echo Show 10 (3rd Gen), which functions as a smart display, smart speaker, and security camera.

Just think: we could possibly have another robot that functions both as a security bot that patrols around the home and can vacuum as well. For customers in the Amazon smart home ecosystem, that would make domestic life that much easier and more enjoyable. For Amazon’s critics, it’s just one more way that Amazon is chipping away at competition and privacy.

The Best Smart Home Devices for Cutting Back Energy Costs