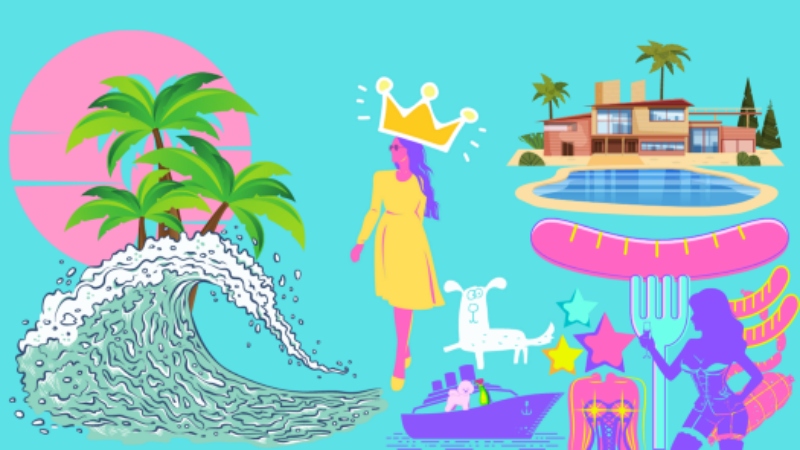 My mom and I are close — but not quite “talk about each other’s sex lives” or “compare lingerie” close. However, once her star-studded, nipple-less lingerie made their broadcast debut on my phone’s FaceTime screen — the one time the picture clarity and reception was alarmingly clear — she’d introduced an indisputable conversation starter.

She aimed her phone’s camera at the gift’s anonymous card, while reading the galactic-themed message aloud:

“Making amends: Our future is written in the stars.”

If my parents weren’t in the middle of a highly contentious separation and pre-divorce canine custody battle, one could chalk this up to a moment of marital rekindling and maternal oversharing. Instead, my mom diverted her attention to the other man in her life: Craig, the platonic male roommate who enabled her Corona del Mar tenancy to block my husband’s eviction threat.

My mom didn’t have to say she was flattered by Craig’s bold, yet nuanced advances; her flushed cheeks and giddy, 8-year-old-esque squeals said it all. Then, just like clockwork:

“There is motion at your Front Door.”

The Ring app-induced vibration in my hand coincided with an ascending tri-tone chime. My mom’s eyes darted diagonally downwards, towards the lovesick intruder below. He was there.

Flustered and unprepared, she stuffed the lingerie back in the bag, anxiously whispered her panicked goodbye, and exited our FaceTime session, before I could warn her…

This vegan sausage-fest has a new star

“That’s a dead carcass! What were you thinking? I can’t…”

My dad swung his exasperated arms towards my and my husband’s shoes before darting up the hill and turning briefly to mouth the words “Stay back!” Apparently, we were an embarrassment — despite the multi-million-dollar “potential investor” carrot my husband dangled to secure our invitation.

In retrospect, wearing leather shoes to a vegan company’s pre-launch event may not have been a brilliant move; however, by the looks of the 6+figure gas guzzlers wedged along the steep oceanview slope, veganism and sustainability don’t appear to be these attendees’ top priorities either.

A bohemian kimono flanked by long, unruly locks tackled my dad for a far-from-subtle romantic reunion atop the hill. Star may be my dad’s flavor of the week, but as far as Hubby is concerned, she’s his golden ticket out of the financial, legal, and reputational quagmires that have been plaguing his business (and delaying my divorce planning) for months. It’s odd attending a party with two men vying for the same woman, neither of which is either man’s wife…

Overlooking our offensive footwear, Star waved from above and beckoned my husband and me up the 89-degree slant and into the light-adorned hilltop palace. In quintessential Laguna Beach fashion, there was no shortage of meat, men, and money on display: A rotation of black-tie waiters floated plates of sliced vegan sausages through the Mediterranean-style estate, backdropped by dramatic 8-figure sunset views over the dark shimmering ocean.

This party was a gold-digger’s paradise — if she could get in. Most stereotypical gold-diggers, however, reek of perfume and desperation; my husband’s CEO status thus poised him as the perfect opportunist to fly far under his loaded target’s radar — for now.

As we edged through the crowd, following Star’s brazen lead, a few familiar faces blurred by: Neighbors, acquaintances from the recent charity gala, the blunt brothers, and a pair of pastel pants I know all too well…

Just to clarify, here’s where Star sits in this three-way equation:

Star, on the other hand, sees my dad and husband very differently:

Star cupped her hand over her mouth, rapidly debriefing us on the forthcoming introduction as we advanced towards a tall, svelte man from behind:

“…a close personal friend — and their biggest investor.”

She reached up to tap the elevated shoulder, who then whirled around for a loose, cordial embrace. Post-hug, the slender tuxedo-donning figure stepped back to welcome Star’s entourage. Her introductions buzzed in one ear, out the other, as his involuntary smile stiffened into a tight, quick nod.

I watched my husband’s eyes bulge simultaneously. This was the face-off neither man expected, nor wanted.

Like a knee-jerk reaction, Hubby rapidly attempted to cover his surprise with his usual salesman’s grin, baring his artificially whitened teeth towards the man who could be his undoing, before excusing himself to the open bar.

Luckily, there is no “amicable” in “opportunity”…

With an extra shot of alcoholic confidence, my undeterred husband marched towards the real stars of the show: the ex-poker players-turned-vegan entrepreneur hosts (and swingers). Some people just won’t take “no” for an answer — and if that means edging out a current investor, abandoning a spouse, or badmouthing the competition, so be it. All’s fair in Hubby’s war.

Don’t look a gift horse in its Trojan mouth

She was right; I still didn’t believe it. Since Craig had no knowledge of the naughty package, my mom was convinced the galactic-themed “free the nipple” gear was my dad’s unorthodox attempt at winning her back. Given his recent foray into the promiscuous world of extramarital dating, coupled with his eccentric assortment of recent love interests (from neighborhood widows to my own mother-in-law), her theory wouldn’t be all that far-fetched.

Unfortunately, I wasn’t sold. The most recent woman to wriggle her way into my father’s bed — and my husband’s house — has her name all over this ploy, and no, I don’t believe that’s a coincidence.

“…do you think I should give him another chance?”

What do you say when your separated mother asks if she should give your cheating father another chance, under the flawed assumption that the “X-traterrestrial” lingerie he purchased was a romantic peace offering (rather than a misplaced gift intended for his crystal healer girlfriend)?

My dad didn’t explicitly tell me the lingerie was meant for Star, and encroaching upon his sexual proclivities and lingerie preferences feels like overstepping my daughterly bounds — and wildly inappropriate. But should I really let my mom make a fool of herself in the instance that she’s wrong, and the nipple-liberation garment was never meant for her eyes or boobs?

“Scratch that; I have a better idea.”

Her better idea? To put the ball in his (my dad’s) court. In other words, my mom plans to play into the sexual flirtation my dad’s gift teased, opening the door for him to step it up and win her back. What could possibly get awkward about my mom flirting with my dad, while he pines over his new lightworker lover, all under one duplex roof, owned by my husband — who’s simultaneously screwing his way into Star’s inner circle?

What happens in Cabo…

Some pulsations are pleasant, others shocking, and others downright disappointing. The one in my hand this time fell into category #3. You see, when you’re married to a serial (convicted) cheater, a 4+figure international charge alert from Amex is instantly categorized as one of two things:

Before resigning myself to a 45-minute hold with the dispute department, I opened my email, intent on forwarding the screenshot to my PI for additional probing. However, staring me back in the face at the top of my inbox was a Timeshare confirmation — from Cabo. He didn’t even bother to use a burner email…

This degree of carelessness isn’t like my husband; he’s a cheater, not an idiot — and he’s proficient enough to have gotten away with it for the better part of our 16-year marriage. But there is one other person with access to this card — and enough gall to deploy it without warning or concern:

I didn’t veto my teenage daughter’s Cabo trip request over fears she’d buy a Timeshare on our card; it was more the 25-year-old unofficial boyfriend-chaperone aspect that raised red flags. However, once my mother-in-law (“Cruella”) took the reins — and borrowed a private plane from her mystery “friend” (who I’m 99% sure is Hubby’s ex-fiancé’s financier father), I figured unauthorized international real estate purchases were no longer a cause for immediate concern. Or if they were, they would be under Hubby’s umbrella of scandals, not my daughter’s…

It’s written in the stars

Flavia forced a flute of champagne into my hand and guided me up the stairs to the yacht’s top deck. Twinkling Christmas lights peppered the expansive ocean ahead, emanating from the mansions lining the coast, the peninsula, and the interspersed islands.

“They already knew her. She…”

A chorus of cheers roared from behind, as the holiday boat parade honked their way through our wake, drowning out Flavia’s intel. While conducting a highly sensitive conversation on the third-floor of a packed holiday yacht in the middle of Orange County’s biggest nautical event might not seem ideal, the chaos almost made our discussion feel more intimate and private. Plus, where else would I get Flavia alone for 90+ minutes on Christmas week — on an event my husband couldn’t be bothered to attend?

Unfortunately, I did neither.

About eight perplexed “What?”’s, five furrowed brows, and four wearied “Come again?”’s later, I finally swallowed the bulk of Flavia’s message. Being the good friend of and spokesmodel for the sex tech CEO’s Swingers’ social network, Flavia is privy to far more information than you’d expect of your average adult film star — and boy did she deliver with a trifold scoop:

And I thought my husband wove a tangled web…

You think you know a person

But do you ever, really?

If there’s one thing infidelity shines a light on, it’s the multi-faceted nature of even our closest friends, family, lovers, and confidants. At this point, deception feels woven into the fabric of my husband’s character — but that doesn’t mean he ceases to surprise me indefinitely.

Further, an unfaithful husband may serve as a confounding distraction, masking the lies and deception of the more seemingly “trustworthy” surrounding parties. But sometimes, even the most innocent or predictable of people can surprise you — or themselves — with their actions.

I suppose embarking on any relationship or joint endeavor is like placing a risky bet. Maybe you never really know who you’re dealing with. Not entirely.

Photo credit: Owned and created by the author, yours truly, in Canva.

The post My Biggest Christmas Surprise Wasn’t the Nipple-less Lingerie My Dad Gifted His Soon-to-Be-ex-Wife appeared first on The Good Men Project.