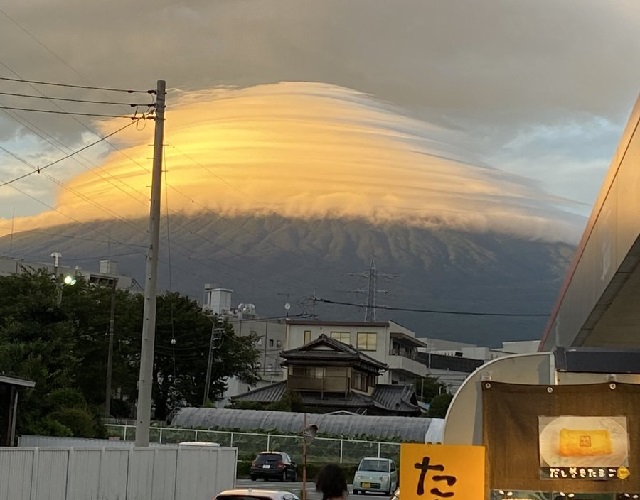 Beautiful, mysterious, and maybe a little delicious too.

Mt. Fuji is sometimes described as being a “shy” mountain. That might seem kind of a strange personality trait to assign to the tallest peak in Japan, but while Fuji sticks out prodigiously in terms of topography, it doesn’t always stand out visibly because of the dense clouds and fog that frequently form in its part of the country, hiding it from sight for anyone who’s not currently on the mountain itself.

So days with those unobstructed clear-sky views of Mt. Fuji you see on postcards and travel guides are few and far between, but that’s not always a bad thing. As Japanese Twitter user @AneGuttnerSr shows in this photo, sometimes Mt. Fuji looks even more incredible when it’s got a whole bunch of clouds keeping it company.

“Mt. Fuji what’s going on?!” tweets @AneGuttnerSr of the conical cloud cover and its surreally beautiful and dynamic, though arguably unsettling, appearance. Several tongue-in-cheek commenters were quick to offer their analysis that this is the Dragon’s Nest from Studio Ghibli anime Castle in the Sky…

…and at least one person theorized that we’re looking at a real-life version of one of the scenes from Nintendo’s Mother video game.

But what we’re really looking at here is what’s called a kasagumo (“umbrella cloud”) in Japanese, or what English-speaking meteorologists refer to as a cap cloud. These form when a high concentration of water vapor in the upper atmosphere gets met by a strong updraft, which rapidly cools the air enough for the cloud to form. The large amount of water vapor also sometimes gives the clouds a faint rainbow-like coloring as the light of the sun diffracts in it. As one commenter pointed out, these conditions occur periodically occur around Mt. Fuji with strong winds blowing out of the west triggering an umbrella/cap cloud-creating vortex, and it’s usually a sign that a rainstorm is on the way.

As amazing as the towering clouds around Japan’s tallest mountain were, however, more than a few commenters’ eyes were drawn to the sign with たまごや, or “egg shop” written on it, saying that it made them see the cap cloud as a giant fried egg. For their benefit, @AneGuttnerSr also tweeted this photo, which shows that the egg shop is a food truck called Pi-chan that offers tamagoyaki omelets and egg sandwiches.

▼ As a food truck, they don’t have a fixed address, but they do have an Instagram account here that sometimes shows where you can find them.

In just goes to show whether you’re looking high or low, there’s always something cool to see in Japan.