Weve all walked past a LUSH its hard to ignore the fragranced fizzing of exploding bath bombs and perfumed wafts of delectable soaps. (Just dont lick them, though they dont taste as delicious as they smell, we are embarrassed to report!) But whether you rush in or stroll on by, youll be interested to know that fragrance has always been at the heart and is the continuing focus of this now-global bath and skincare brand. So when The Perfume Society was invited to LUSHs first stand-alone Perfume Library, a concept boutique in Florence the birthplace of modern perfumery, no less we jumped at the chance to investigate. Note: LUSH formerly offered their scent creations under the brand Gorilla Perfumes but now all scents are under thisThePerfume Library umbrella.) 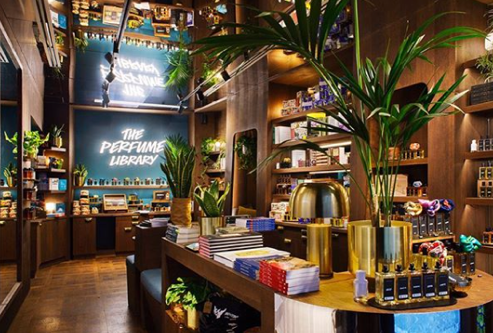 On entering this temple to perfume on theVia dei Calzaiuoli, in the heart of this ancient city, deep fragrance notes drift towards you while bird song fills the air, in a room filled with impressive stacks of books dedicated to the alchemy of fragrance. (Think Neil Chapman, Roja Dove and reference books covering the Renaissance fascination with scent). It is, in essence, acosy and intimate space decorated with dark woods, healthy emerald green plants and with cushioned cubbyholes you can sink into, whilst exploring LUSHs scents and brushing up on your fragrance knowledge.

You can then slip through a clear dividing curtain into the LUSH Lab, to explore a conveyor belt of their best-loved fragrances in body spray form. This also features fragrance showers (in true fun LUSH style), where you can literally be enveloped by your scent of choice, while being played the song or songs which inspired the creation of the scent. All fragrances, it turns out, are created at LUSH while listening to an inspiring playlist and these showers showcase that beautifully. You almost feel as though you are part of the process. 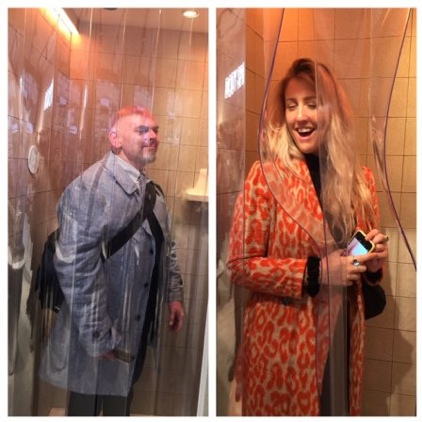 The birdsong mentioned is a fusing of founder Mark Constantines bird watching passion-slash-obsession, and a nod to the Renaissance belief that such sounds balanced and calmed the spirt. It is that fusing of LUSH values and Renaissance inspiration that makes this concept store so unique and thrilling to explore.Inspired by such legends as Catherine de Medici,who brought perfumery to new heights under her sphere of influence during the 16th Century, Lush wanted to place their Perfume Library in this wonderful city to pay tribute to the birth of modern perfumery.

When speaking to Mark (quite the Renaissance man himself, actually), he revealed that LUSH itself actually came to fruition (in 1995) because of his impulse to create fragrance. I realised I could express myself much more effectively through fragrance than I could music, literature, poetry, whatever. With this deep sentiment for fragrance and Florence, The Perfume Liberary have also developed five new exclusive fragrances for the concept store (like you need more of an excuse to plan a visit): Nero, Fresh As, Sappho, Frangipani and Confetti, created by perfumer Emma Dick. 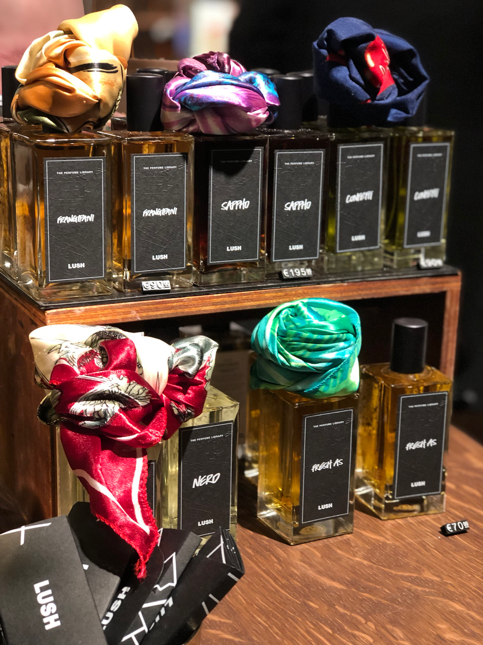 Nerois inspired by Princess Nerola, who was said to have fragranced her gloves and baths with the happy scent of neroli. It is bright and uplifting and develops on the skin to reveal woody tones. Then theres Frangipani, already the bestseller in the store, filled with tuberose, almond oil and frangipani. It takes its name from the story of a wealthy 16th Century Italian family who in a time of famine gave bread to the poor, which happens to be where the word Frangipani actually comes from: frangi(break) and pani (bread).

We also adored Confetti, a deeply romantic scent with coffee, pear, rose and violet. LUSH co-founder Rowena felt is smelt like sugared almonds, and therefore this celebratory confectioneary, traditionally enjoyed at weddings (and also popular in Italy) gave this fragrance its name. Sapphowas coined after the famous Greek poet Sappho, a heavy iris-based fragrance that is a homage to this very Florentine flower. Heavy, powdery and filled with tonka absolute, vanilla absolute and tobacco absolute, it is an almost deep dangerous fragrance, that has real staying power on the skin. 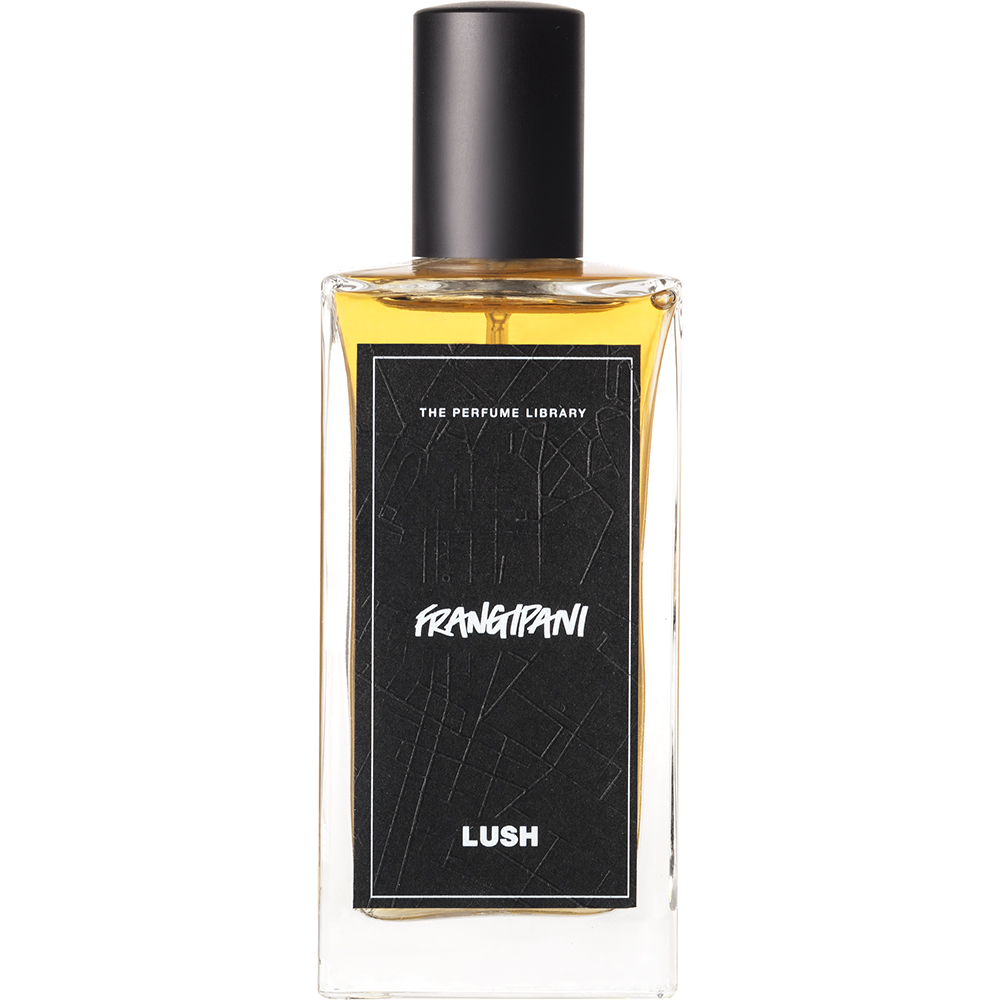 But they didnt stop drawing on the Renaissance tradition there. You can experience fragrance profiling based on your temperament and bodily state, taken its lead from the Renaissance belief in the Greek physician Hippocratess four humours: blood, yellow bile, black bile and phlegm (!), and their influence on the body and its emotions. So when you sit down for your profiling, you may both decide that a bright, hot and dry fragrance is best suited if your humour is phlegmatic (thats grumpy, wet, sad or irritable!)

Taste also plays a big part in the Renaissance fragrance prescriptions; it was common to create sweets that acted as medicines filled with essential oils and herbs to cure you. LUSH expands on this, prescribing a sweet and flavoured sugar cube which turns into a (quite frankly delicious) tea, with dry ice for fun and dramatic effect. It is enjoyed while fragrances are personally selected for you from the collection, based on your preferences and needs.

This in itself is a very fun and surprisingly revealing experience, My own fragrance prescription was cult classic LUSH fragrance Cocktail, to dampen my choleric nature (those humours again!), in the hope of achieving more balance. It is a very modern approach to selecting fragrance, and a fun way to draw on ancient traditions to arrive at a fragrance partly chosen to delight the senses, partly chosen to promote wellbeing. A thoroughly inspiring way to choose fragrance, in a whole new way. 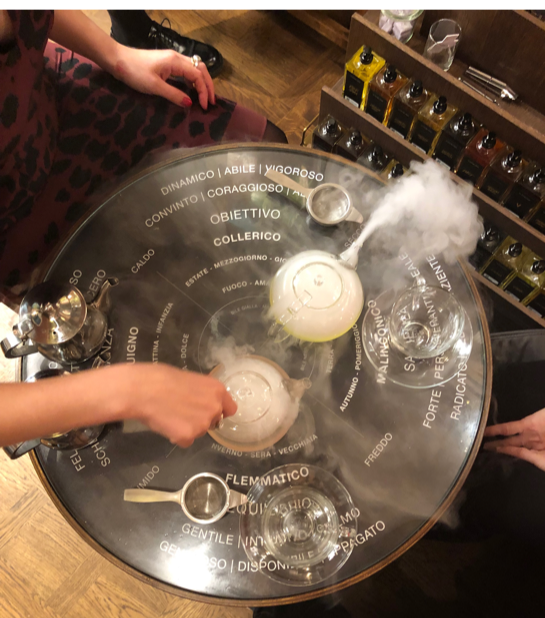 The LUSH Perfume Library is a treasure trove of fragrance and actually rather hard to leave. Dedicated to LUSHs longstanding mission to inject fun and magic into smell and the senses, we know it will spark joy into anyone who passes through its doors. And if you are lucky enough to be in Florence, make sure you explore this Library. Jump into a fragrance shower, peruse the fragrance conveyor belt because no one does a fragrance experience quite like LUSH!

The post LUSH has new perfume library and its in Florence! appeared first on The Perfume Society.