... to temptation today.  I went outside to trim the forsythia and was bombarded with the aroma 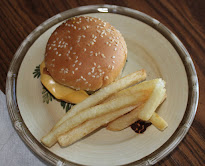 of char-grilling burgers from Burger King so when I came home from dropping the tosses off at Goodwill I swung into the drive-thru and got a cheeseburger and fries.  (I pretended that I was only going to eat these few fries but I ate them all. Of. Course.)  Which took care of more than my daily allotment of WW points but this is the first fast food I've had in more than six months so I'm not too fussed.  I'll get back on the plan tomorrow and things will be fine.  I was going to take a walk this afternoon but it started drizzling so I didn't.  Maybe tomorrow.

I went downstairs and sewed on the Dress no. 3 (caftan) I had cut out.  It's inside out in this picture because it's easier to pin it when it's hanging up.  I'll get the sides sewn tomorrow and the neck bound and the hems done too.  I've decided to take a break from knitting to sew up the garments I have cut out.  Next comes three pairs of Pants no. 1.

The hummingbird came today and stayed long enough for me to snap a few photos.  This is the best one.  I love watching it dodge the bees and wasps that buzz around the nectar feeder.

While the hummingbird was at the feeder this squirrel was playing king of the umbrella.  Look at the way he's looking at me as if to say, just try to chase me away.  This is the one that gobbled up all of the suet cakes so he's the reason that the suet feeder is empty.  I might refill it in a week or so just to see if he got the message.

The thought that the man in her dreams was Brady kept Naomi’s eyes open and her mind whirling.  She had never before fantasized about a man like Brady.  He was older than her by at least ten and probably fifteen years.  He was shorter than she was, only by an inch or two, but still shorter, and if she wore heels that gap would widen.  Did she have enough inner strength to stand up tall and endure the looks they were sure to get?  Stinson was not New York or even Chicago.  Stinson was a small city of just under one hundred thousand people, and that included the surrounding rural areas some fools called suburbs.

She first had to tell Marcus she was going out on Saturday with Brady, not on a real date, not a romantic date, just a friends date.  Then she would find out from Brady where he was planning to go so she could figure out what to wear, not too fancy she hoped.  She did not like fancy food, none of that foo-foo sauce that hid the fact that the cook, oh excuse me, the chef used substandard raw ingredients.  Her mama always said, use fresh food and cook it so people can taste the goodness God put in it and you will be fine.  She did not hold with heavy cream sauces or over spicing her food.  She liked to fix it so the person who ate it could taste what that particular food was supposed to taste like.  Naomi often used a small squirt of fresh lemon juice, especially on fresh vegetables, to brighten up the flavor.  She was also a big fan of adding a pinch of a mixture of salt, ground cayenne pepper, and thyme in her dishes.  It did not intrude on the natural foods; it just brightened their flavor in ways she could not explain.

Today's toss was a tote filled with all of the Chinese New Year dishes, linens, and decor.  I haven't used any of it in at least ten years and don't envision throwing a big dinner anytime soon so out it goes.  I have little statues of all of the Chinese Zodiac animals and thought I'd keep the rabbit which is my animal but I had it on the table for a couple days and it just didn't speak to me so I put it back into the box.

We're supposed to have chilly and rainy days the rest of the week.  I hope we get back to those 70 degrees and sunny days that ended last week.  Those were my favorite kind of days.