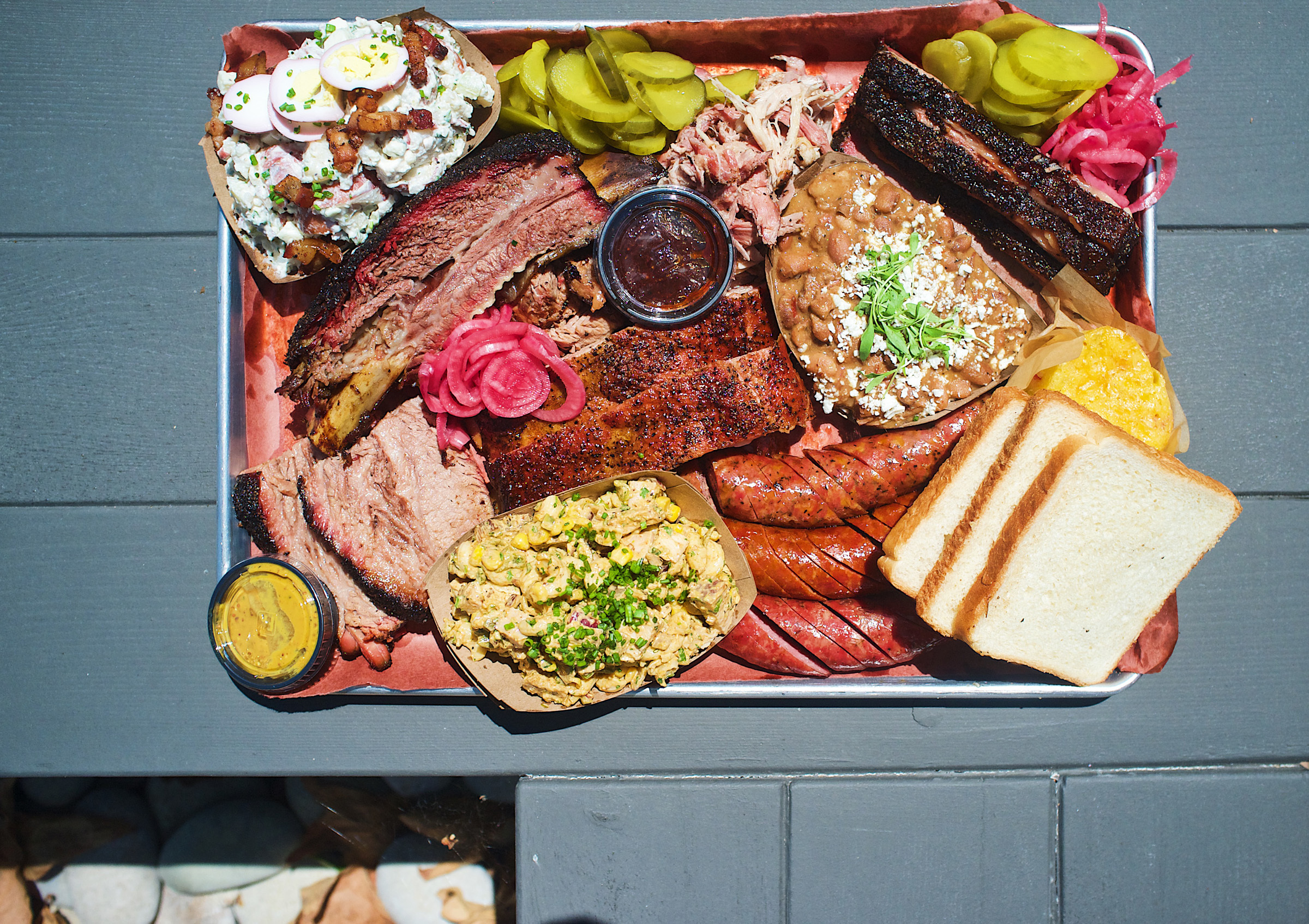 A frosty beer, a foldout chair and a few carefully placed bricks to maintain social distancing: Only one of these things isn’t a typical sign that you’re waiting, Texas-style, for BBQ, but then again the times aren’t typical. Opening during a pandemic was never part of Heritage Barbecue’s plan, but with two patios and some of the best barbecue in Southern California, the new restaurant is making it work—and still drawing two-hour lines. And those lines? They’re as much a part of the BBQ experience as brisket, if you know how to wait it out right.

After years of pop-ups along Orange County’s brewery scene, owners Daniel and Brenda Castillo finally opened their dream restaurant: an ode to long-smoked meats, plump sausages, succulent ribs and a rainbow of sides, weaving Latin flavor throughout. It’s also a pioneer in permitting. California’s notoriously strict restaurant rules on outdoor BBQ smokers have long deterred pitmasters from launching restaurants built around the mighty offset barrels, but the Castillos worked tirelessly with their health advisor, setting Heritage in motion and starting a custom buildout on two 1,000-gallon tanks before the husband-and-wife team even knew if they’d be able to meet all requirements.

“I’m sure I could figure out the indoor smokers, but to me this is the most authentic way that you can do it,” says Daniel Castillo, wiping sweat from his brow on a 90-plus degree day toward the end of a cook. When the smokers are really going, the strip between the two carbon steel tanks can reach around 200 degrees. “I knew that if we couldn’t make this happen, this restaurant wouldn’t have happened. And it’s kind of funny: We started the process of opening the restaurant before knowing if we were going to be able to do this. We just took a huge gamble on it.”

The gamble paid off. Heritage Barbecue opened in August, its kitchen situated in a former taco stand next to Mission San Juan Capistrano. The bulk of its 4,200-square-foot space is split between two patios where guests ferry trays overloaded with borracho beans, thick slabs of brisket and beef ribs fit for Fred Flintstone to picnic tables dotted with amber cups of local craft beer.

For the grand opening, their first customers showed up the night before to get in line. The next day, a group arrived at 4am—and Heritage doesn’t open until noon on Sundays. Now long-time fans, curious newcomers and BBQ aficionados alike line up two to three hours before opening. “There are a lot of people who say they’re gonna come out when the lines die down, but honestly it’s just been getting more and more busy,” says Daniel Castillo. “I tell them you’ve just gotta come because if you’re thinking it’s just a fad or it’s all hype, it’s not gonna happen.”

When you visit Heritage Barbecue—and you should without question visit Heritage Barbecue—you might arrive a few hours before opening to claim your spot in line, or take your chances as the afternoon wears on and the line snakes down the block and down the ramp into the back parking lot, with “STOP HERE” bricks keeping distance between you and other parties.

Lengthy waits are par for the Texas-BBQ course, but explaining line culture has been hit or miss for the Castillos; impatient or unaware guests have left snarky reviews about wait times or limited stock, but Texas BBQ fans know the wait is all part of the experience, one that, pre-coronavirus, could even feel communal like a tailgate party, where you show up with beach chairs, sunscreen, water (and in the case of many Texas BBQ joints, your own beer), and kill a few hours until the doors open.

And because Texas-style BBQ takes time (Heritage’s brisket smokes for 12 to 14 hours, a process that begins the day before you show up to eat) stock is always limited. Lennon Gunter, formerly of Electric City Butcher, now serves as the in-house butcher for Heritage and his sausages alone are a detailed and multi-day process: They’re made on day one in a range of flavors (chorizo, cheeseburger, beef chimichurri, bratwurst, lemon pepper—the list goes on forever), then hang overnight and on the second day get a cold smoke in the barrels at about 150 degrees, then get an ice bath, then dry again overnight, and then, finally, they go back on the smoker at a hotter temperature to finish.

“It’s a really hard thing to do,” says Daniel Castillo, who trained at multiple Texas BBQ spots, including the beloved Brett’s Backyard Bar-B-Que. “We’re trying to get people down here used to the idea of not having a closing time: When we’re done, when we’re out of food, that’s it, because everything is sliced fresh to order to maintain the quality of the meat. It’s proving to be a little bit of an issue, especially down here in south Orange County, but generally the folks that have been following us for some time already—the last three or four years—they get it, and they’re always the first ones in line, too."

You can bank on Heritage offering around 130 of their tender, buttery briskets every week. They smoke 20 to 24 each day, and on weekends the team offers beef ribs (at three per plate, and about 20 plates each day). They run through a whopping 60 pounds of sausage every day of business, and just under 30 racks of spare ribs. Meats are some of the highest quality you’ll find on the BBQ circuit: Creekstone Farms black Angus brisket, Duroc or kurobuta-breed pork, pasture-raised heirloom-breedf turkey, Jidori chicken. But like any good BBQ joint, the Castillos know it isn’t just about the meat.

Sides include three forms of mac and cheese (pesto, classic, and choriqueso, all built with a queso-inspired base); esquites; long-simmered borracho beans stewed with beer and chopped brisket; potato salad topped with house-smoked bacon and pickled eggs; Frito pie; farmers market vegetables from the nearby Ecology Center; and meatier specials such as beef cheeks or smoked meatballs. The jalapeño-and-cheddar cornbread? Made special by their neighbors at FKN Bread. Their gourmet spin on the classic sliced white bread? That’s shokupan, Japanese milk bread, sourced from 61hundred bread, a new project by former Montage chef Karlo Evaristo.

And because the lines are all a part of the process to get to these sides, specials and smoked meats, the Heritage team has a little pro tip: While one patio is home to those 20-plus–foot-long smokers, the other patio is where you’ll find the bar—and the bar menu. Guests who just want a taste can head straight to the bar patio for smaller and exclusive bites like chili or cold turkey salad, or, more recommended, can place an order for beers and snacks to enjoy while they wait for the full spread in line.

Of course when you do wait in line for Heritage Barbecue—and you should and you will—remember that it’s all part of the experience, so come prepared and make the most of it just like they do in the Lone Star State.

“People come up to me like, ‘This side of the patio has less shade,’” says Daniel Costillo, “and I just say, hey, man, in Texas they wear big hats. That’s all you gotta do: Bring an umbrella or wear a big hat.”

Heritage Barbecue is now open in San Juan Capistrano at 31721 Camino Capistrano, with hours of 3pm till sold out Wednesday to Friday, and noon to sold out Saturday and Sunday.

Here’s the gear you need to have Thanksgiving via Zoom
November 23, 2020