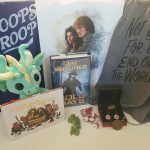 My Facebook memories have been oh-so-kindly reminding me that every year since I was pregnant with our now 10-year-old, Phoenix Fan Fusion/Phoenix Comic Con has been the typical way we kick off the end of May around here. For the second year in a row, we will not be there, and like many things right now, COVID is to blame for the reason the event is not running. It reminded me that this is the second summer convention season getting hit hard by COVID, and I know that has to be hard on a lot of the small businesses and artists that count on conventions as part of their business model.

While I can’t undo canceled and postponed conventions, I would like to highlight some small geeky businesses and artists you should check out. Some I have seen at conventions, some I discovered online but have other conventions or events on their circuits. All I have purchased from personally.

Born in New York but recently relocated to Philadelphia, Jordandené carries a selection of clothing and household goods featuring fandom-related quotes. You’ll find everything from romance books to Star Wars, Marvel, and DC among other fandoms. Her t-shirts and tanks layer very well with cardigans and jackets. Each month also brings in a new limited-edition design.

Like Jordandené, the Colorful Geek does a lot of fandom-based clothing and household goods. Elena offers a variety of fandoms from Disney and Broadway plays to Star Wars, Schitt’s Creek, and The Umbrella Academy. It is heavily worth noting that there isn’t so much overlap between these brands that one feels like you should check out one over the other. In fact, check out both because, between the two of them, there is a good chance that your favorite thing is being covered. Again, the designs tend to layer well with jackets and cardigans.

Allison of RockLove jewelry clearly has an eye for the gorgeous little details that make her jewelry some of the most coveted among fans. She features lines like Star Wars, Star Trek, Pokémon, Disney, Marvel, DC, Pixar, and more. Everything is officially licensed and handcrafted. If you feel like being a grown-up geek means getting to have the super nice stuff, RockLove is the super nice stuff, and I have seen items from newly launched collections sometimes sell out within the first day.

Another fine jewelry option for geeks, Badali Jewelry does a lot of licensed lines with comic book creators and authors. Tolkien, Brandon Sanderson, The Iron Druid Chronicles, The Dresden Files, Darker Shades of Magic, and The Kingkiller Chronicles stand among the works they have designed pieces for. They also carry original pieces and jewelry designed for engagements and other significant ceremonies. Again, these are the sort of handcrafted pieces fans really do covet, and the pieces in our household were things that were often gifted.

Speaking of books, getting things signed is another thing I have really missed because of COVID. Luckily, the Poisoned Pen is there to offer many first-edition, author-signed copies of a huge selection of books. They do ship as well, which is how we’ve gotten signed copies of books from authors that don’t hit our state as often. The Poisoned Pen is the home bookstore for Diana Gabaldon of the Outlander series, and you can pre-order a signed copy of the next book through them (and yes, they can ship to many places outside of the US).

Geeks love dragons and other fantasy-based creatures, and Dragons & Beasties offers lots of items to fulfill that need. From adorable figurines and plushies to pins and coloring books, there is a fun variety of gifts and household goods based around Becca’s adorable designs. If you want something truly unique, keep an eye out for her eBay auctions featuring one-of-a-kind handmade figures. There’s even an option to buy unpainted vinyl figures that you can paint yourself at home.

I scream, you scream, dice goblins always scream for more dice! I couldn’t have a list of geeky goods without including Ice Cream Dice. Canada-based Ice Cream Dice offers a variety of original dice based on sweet treats as well as a selection of curated dice from other companies. If that’s not enough dice for you, you can buy an entire pint of dice or even sign up for their subscription service.

If you’re a true dice goblin, one source of shiny click-clack math rocks is never enough, so while you’re at it, check out Sweden-based Lindorm dice too. They also feature a combination of original dice as well as curated dice from other companies. Their originals include a Norse mythology-based line as well as a Viking-based line. Both were originally funded via Kickstarter and both times we went all in and have zero regrets.

Jason Palmer has made some of the most ridiculously gorgeous art based on television and film characters I have ever seen. His booth is always one we stop at, and I have never left a convention without buying a piece for myself or someone else as a gift (and I have seen many people get the art he has designed signed by the actors portrayed in them). He has featured everything from Marvel and DC characters to Star Wars, Indiana Jones, Battlestar Galactica, The Walking Dead, Farscape, and Once Upon a Time, among others. If you saw the beautiful mural from Star Wars Celebration 2019, he was the artist behind it.

Travis Hanson / Life of the Party

Another booth we can’t leave artist alley without buying something from is that of Travis Hanson, whom you may know from his series Life of the Party. His stuff did appear over at GeekDad for a while. If you love fantasy-based tabletop gaming, his comic books and other art are well worth checking out. His store features a variety of books, prints, and other gifts that include his Life of the Party characters as well as other fun fantasy art. Have you ever encountered the half man/half corgi corgitaur? Visit his shop and you can. Travis also can be hired to do art commissions as well.

Click through to read all of “10 Geeky Businesses to Check Out if You Miss Exhibitor Halls and Artist Alleys” at GeekMom.If you value content from GeekMom, please support us via Patreon or use this link to shop at Amazon. Thanks!

Click through to read all of "GeekMom: 10 Geeky Businesses to Check Out if You Miss Exhibitor Halls and Artist Alleys" at GeekDad.If you value content from GeekDad, please support us via Patreon or use this link to shop at Amazon. Thanks!