Over 400 people joined the rally..,many called for their unions to move away from privatized healthcare altogether and to support single-payer healthcare on both a national and state level. .. CURO press release

CURO Cross Union Retiree Organizing  - we made a new acronym for a just formed alliance. Retiree Advocate/UFT is the main organizing force in the UFT but we now have allies in other unions - due to the amazing work of our own Gloria Brandman, who in the decades I've known her has always pushed the idea of building cross union alliances, even at the expense of tooting our own horn and branding ourselves as the moving force. It's true coalition building towards a united front -- and a model for the factions in the UFT to do the same for elections and issues of agreement.

I'm finally back in Rockaway after Wednesday's rock'n and roll'n rally through lower Manhattan by mostly us old folk. Naturally a whole bunch of us ended up at the Dark Horse bar on Warren St. and then I walked halfway uptown to Houston St until my leg gave in and I took the subway to Grand Central.

There's a lot of coverage and photos and videos -- I'm processing mine today -- so I'm going to put up a number of posts with the coverage and follow those in a few days with my analysis of the significance of the event, the organizing behind it and what the coalitions being built might hold for the future. 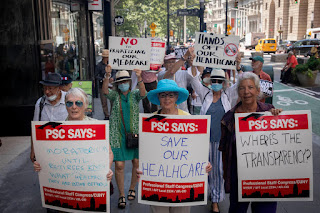 FAKE NEWS -- Our current health care plan is privatized so with the new one nothing changes. Fudging -- only 20% of those who choose Medicare (Some choose MedAdv) is privatized - the Emblem health part. Under the proposal 100% would be under private management. Think charter schools liiving on tax payer money. 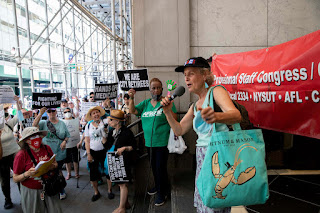 I'm getting a good response to my commentary and re-posting the Julia Rock/Daily Poster piece: Are Municipal Unions Selling Out Retirees? Hell YES -

Hottest day of the year and hundreds of municipal retirees (and some in-service) showed up: UFT, DC37, PSC, CSA, MEA, and more.

WBAI Evening News Link (story starts at 26:50). - I'm interviewed along with Bennett Fischer and Vincent Wosjnis - who flew in from his home in Ghana for the event (just kidding - he flew in to see his daughter.)

The Labor Press has comprehensive coverage, including the unions' point of view.
https://www.laborpress.org/we-want-our-medicare-nyc-retirees-protest-possible-privatization/

AMNY had a good report:

One if the unions made a video: https://youtu.be/s2SaR0ikJTw

Here's the press release from CURO.

PRESS RELEASE: Rally and Tour to Save Medicare for NYC Municipal WorkersPress Contact:Bennett Fischer  tremblychap@gmail.com  Today, Tuesday June 30th a coalition of retired and active NYC municipal workers held a rally and "tour" in downtown Manhattan, from Bowling Green to City Hall, and called for the Municipal Labor Committee (MLC) to halt negotiations aimed at selling off the administration of the City’s Medicare plan to a private insurance company. Over 400 people joined the rally as it started in the plaza in front of the old Beaux-Arts, U.S. Custom House, now the home of the Museum of the American Indian, and proceeded up Broadway towards City Hall, stopping at various union headquarters and the NYC Office of Labor Relations (OLR) along the way. At the rally, and at each stop, municipal retirees called for the MLC and OLR to institute a moratorium on their Medicare privatization plans. More than that, many called for their unions to move away from privatized healthcare altogether and to support single-payer healthcare on both a national and state level.The MLC – which is the healthcare bargaining unit for the City's municipal unions – plans to achieve $600M in agreed-to healthcare savings for the City in fiscal year 2021 by putting its healthcare obligations on the auction block to the highest bidder. This switch would replace the City’s traditional, government administered Medicare plan with a so-called Medicare Advantage plan, operated by a private insurer. Medicare Advantage plans are known to make a profit by charging higher administrative costs than government administered Medicare, by negotiating lower payments for medical procedures, and by limiting patient care to a restricted number of in-network healthcare providers and hospitals. Retirees are concerned that the proposed new plan will limit their choice of doctors, eliminate hospitals and networks from their current coverage umbrella, require burdensome referrals and pre-approvals for medical procedures, and increase out-of-pocket expenses for services and prescription drugs. Many are concerned that lifesaving care they now receive under the current structure will no longer be available on a national scale or from their current doctors, with whom they have established deep personal relationships. They worry that privatization will put them on a slippery slope of ever-diminishing healthcare returns.Retirees are also furious that the City's healthcare negotiations are occurring behind closed doors and only came to light in March, when retirees in the Professional Staff Congress (PSC) – CUNY’s educators union – got wind of the backdoor dealings and spread the word. Soon, retirees in the United Federation of Teachers (UFT) became involved and were joined by retirees from other municipal unions. They began to question union leadership and demanded to know details of the Medicare changes under consideration.In April, retirees in the PSC passed a resolution calling for a moratorium of the City's healthcare negotiations. Retiree Advocate/UFT - a caucus of the UFT's Retired Teacher Chapter - placed a motion for a moratorium on the agenda of the UFT’s Delegate Assembly. On May 24th, they held a news conference near City Hall in which members of the UFT, PSC, CSA, and DC37 spoke out against Medicare privatization. They were joined by speakers from Physicians for a National Health Plan and researchers from the CUNY School of Public Health. In response to the growing outcry, UFT President Michael Mulgrew held a telephone town hall in which thousands of retirees participated. President Mulgrew, a key player on the MLC board, said that the UFT may still decide to opt out of a switch to private Medicare, but despite assurances the closed-door negotiations have continued, with a decision on a winning bidder due by a July 1st deadline.UFT retiree Bennett Fischer said, “Working with my union, I spent many years pushing back against the hedge-fund billionaires and the charter school profiteers who wanted to destroy my profession, kill my union, and privatize public education. Why would we ever acquiesce to letting the same frenzy of sharks devour our public Medicare system?”Stopping in front of the Broadway offices of CUNY's teacher union, Nancy Romer, retired Professor Emerita, Brooklyn College, and PSC Executive Council member, said, “The Professional Staff Congress of CUNY, the AFT local representing over 30,000 workers at CUNY, is asking for a moratorium on the Medicare decision by the MLC until more input and investigation occurs. We need to fully inform our members of the possible healthcare packages and get their input on this most important decision affecting almost 300,000 City retirees and partners and all present City workers who expect to retire over the next few decades.”"The proposal to move City retirees to a Medicare Advantage plan is a fundamental diminishment of their hard-won retirement benefits and will disproportionately impact lower-income retirees. I am proud to stand with retirees in calling for a democratic and transparent process regarding the future of their healthcare coverage. It's unacceptable that public servants are being asked to accept reduced benefits when the most affluent New Yorkers have only become wealthier during the pandemic," said Sarah Crean (member of the City Council staff union organizing committee) when speaking near City Hall.“The City should not achieve its labor savings by taking critical health care options away from current retirees, many of whom are on fixed incomes and rely on their doctors and providers,” said Council Member Brad Lander. “We do need to find savings, but we should do that through attrition, efficiency, and smart choices for the future, not by reneging on promises we made long ago to the teachers, nurses, secretaries and so many more who showed up for us for decades.” ===