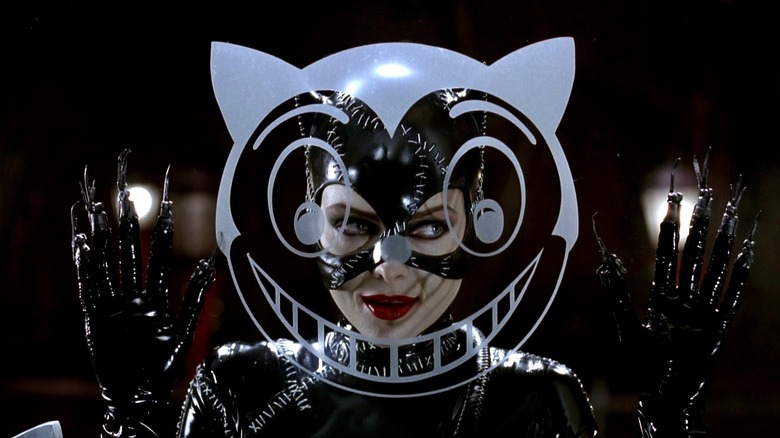 Thirty years ago this weekend, "Batman Returns" swooped into theaters, and franchise filmmaking was never the same. On the movie's 25th anniversary in 2017, director Tim Burton recalled how the word "franchise" in relation to films was not as much in the cultural lexicon when he mounted his summer '89 blockbuster, "Batman." It was only on "Batman Returns" that he began receiving notes from a legitimate fast food franchise, McDonald's, who wanted to sell Happy Meals to concerned parents and were not enamored with how aggressively consumer-unfriendly "Batman Returns" was.

This is a superhero sequel where a circus freak in devil horns breathes fire on a teddy bear. Batman himself — who only gets one line in the first 37 minutes of the movie — then turns the Batmobile and fires up its afterburner in the freak's face. It leaves the poor (literal) devil writhing in flames. Batman also smiles mischievously and dispenses summary executions in battle, handing off dynamite sticks to another Goliath henchman, throwing him down a storm drain and blowing him to pieces.

We haven't even gotten to the sewer-dwelling Penguin (Danny DeVito) and his constant double entendres. Improbable as it might seem, "Batman Returns" is a Christmas movie as well. This is the nightmare before "The Nightmare Before Christmas." 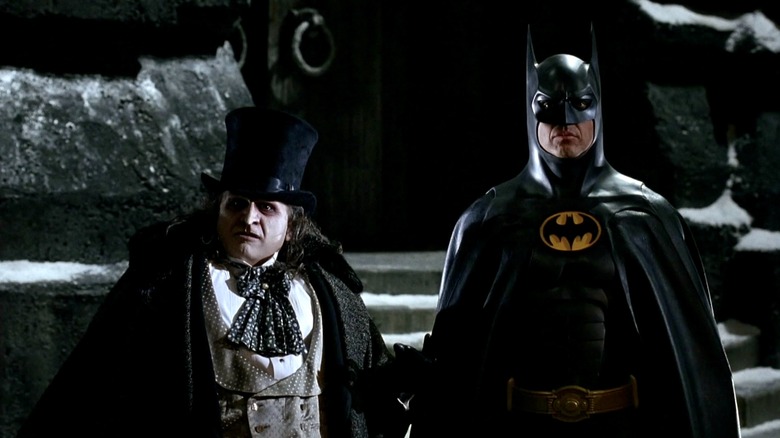 "Batman Returns" is Burton through and through, and it would be easy to come away from it thinking his real interests don't lie with the superhero who's got his name and Bat-logo on the pail. Screenwriter Daniel Waters ("Heathers") penned the script, with Sam Hamm of the first "Batman" receiving a "Story by" co-credit. Often, in screenwriting, the first ten pages — equivalent to the first ten minutes of the movie — are considered crucial for hooking the reader, helping them imprint on the main character, and establishing the central dramatic question.

It's a full 13 minutes before Keaton shows up onscreen as Bruce Wayne in "Batman Returns." His single line of dialogue comes around the 17-minute mark, when he's suited up as Batman and says to Commissioner Gordon (Pat Hingle): "We'll see."

This is a little different than having the Caped Crusader hang back in the shadows and deliver a noir-like voiceover per this year's "The Batman." Yet it was Keaton himself who sought to minimize his dialogue in "Batman Returns," cutting out unnecessary lines and letting his character inhabit the Bat-suit as the strong, silent type.

Going by the 10-page standard, the Penguin is the true protagonist of "Batman Returns." He's got the most screen time, and they even give him this whole mythic, quasi-religious backstory where he's sent downriver in a basket like Moses. Thirty-three years later, he formulates a plan to enact vengeance on the firstborn sons of Gotham City à la the Old Testament God sending Egypt the plague on Passover.

One dramatic question, if not the central one, is: will this black-mouthed prophet succeed in his hero's journey, like Thanos in "Infinity War?" 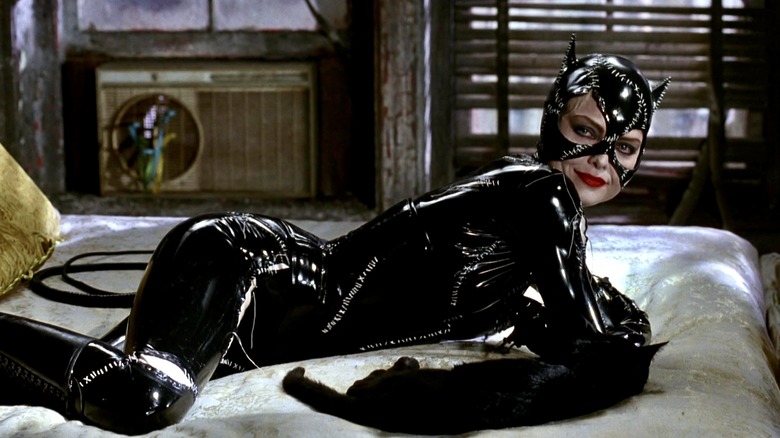 The appeal of "Batman Returns," its "naked sexual charisma," as Penguin puts it, lies in how positively ghoulish and gleeful it is. This is a film that dwells halfway between the camp of the '60s "Batman" movie and TV series and the later grim and gritty adventures of Christopher Nolan's "Dark Knight" trilogy and Matt Reeves' "The Batman."

Laced with black humor, Burton's film embraces the possibilities of creativity with a destructive edge. As always, Batman can channel that into the comparatively healthier outlet of crimefighting, while his rogues are left psychologically damaged yet weirdly relatable in their trials and transformations.

Note how we share Penguin's point of view as he, the outcast unloved by his own parents, looks out from the sewer bars at the Rockefeller Center-like Christmas tree in Gotham Plaza. ("Oh, but you can. Oh, but you will.") We are in Pengy's perspective. This is "Penguin Begins," but it's also "Catwoman Begins."

Burton makes room for his supervillain origins. None of this is meant to provide anyone with ammunition for some trite "But it's not Bat-centric enough!" argument against "Batman Returns." Burton and Keaton play the long game here, working in more of Bruce and the Bat as the movie goes on, trusting that the viewer already knows him. In the first movie, Keaton's character arrived fully formed, as typified by the immortal line, "I'm Batman." He wasn't Batman beginning: he was Batman being. 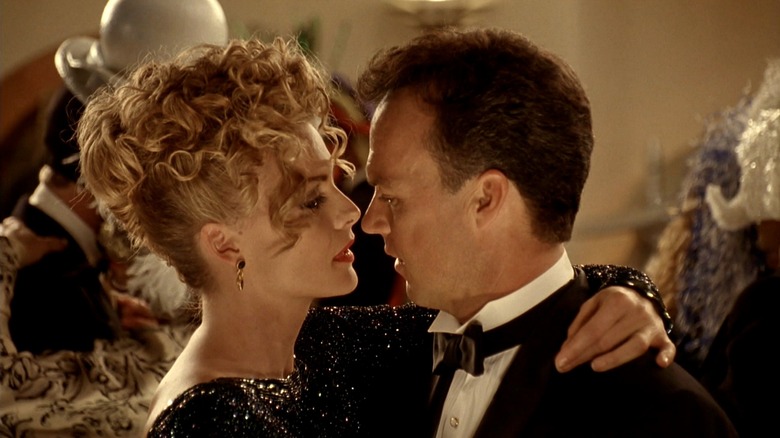 Keaton and Pfeiffer have great chemistry; Bruce is immediately smitten with Selina, and in its own way, "Batman Returns" manages to smuggle a real adult relationship into a superhero flick. In costume, Catwoman looks like she's held together by stitches, and they've both got emotional baggage — manifested as physical scars, which are sensitive to the touch. Bruce talks about his last relationship with "Vicky," threading this back to his romance with Kim Basinger's "Batman" character. They had trouble reconciling the "two truths" of his dual identity, and we've been there with him, so it almost feels like a true, lived experience he's recounting.

'90s kids with no knowledge of Christopher Walken's previous work in "The Deer Hunter," etc., may have been confused by how his character is given almost equal weight to the other better-known hero and villains in "Batman Returns." Walken plays "Gotham's own Santa Claus," Max Shreck, who holds annual Max-querade balls and sports a pinstripe suit, bowtie, and Beethoven-esque hair.

Against the art-deco backdrop of Burton's live-action Gotham, Shreck resembles a drawing of one of the non-super-powered heavies from "Batman: The Animated Series" come to life. His name links him to the real-life German actor who played Orlok in "Nosferatu" (and let's not forget that Bruce's faithful butler, Alfred, is played by Michael Gough, the vampire hunter from "Horror of Dracula").

With its smiley Felix the Cat head, Shreck's Department Store sells commercialist lies, and Catwoman wants to burn it all down (like Burton himself at this stage, maybe). As Penguin observes, somehow Shreck is "a well-respected monster," while he — born Oswald Cobblepot, with flipper hands and a silver spoon and cat in his mouth — looks like he crawled up out of the lagoon of toxic waste that Shreck has left steaming below Gotham. 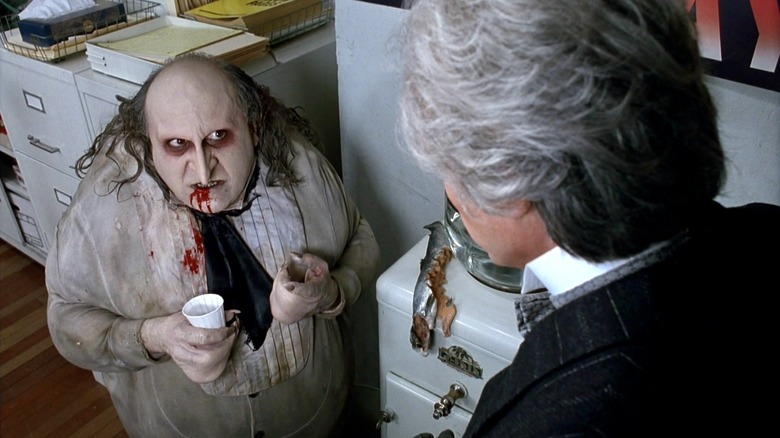 Penguin's mayoral campaign in "Batman Returns" offers a little political satire, with Shreck bringing in fresh-faced image consultants, Josh and Jen (Steve Witting and "SNL" alum Jan Hooks), to make him more media-friendly. There's a scene where Penguin comes downstairs in his dumpy long johns, stuffing his face with raw fish, only to find a room full of supporters. In full view of them, he viciously bites Josh's nose. Then, he leers at Jen's rump and quips, "I'd like to fill her void."

Let's just say, in the 21st century, it no longer seems so implausible that a lascivious sewer monster could put his grotesqueness on full display yet still receive blind, cheery support in his bid for political power. Cross-reference a certain real-life presidential candidate's 2016 quote, "I could stand in the middle of 5th Avenue and shoot somebody and I wouldn't lose voters," with Carmine Falcone (Tom Wilkinson's) 2005 "Batman Begins" quote, "I wouldn't have a second's hesitation of blowing your head off right here and right now in front of 'em. Now, that's power you can't buy!"

The contempt Penguin holds for the "squealing, wretched pinhead puppets of Gotham" recalls the misanthropy of Andy Griffith's character, "Lonesome" Rhodes, in "A Face in the Crowd." The funny thing is, there's a moment in "Batman Returns" where Penguin weaponizes an umbrella full of squeaking bats against the Ice Princess (Cristi Conaway). And he says, "Rats with wings, do your thing!" — proving the franchise had already solved Paul Dano's Riddler clue in "The Batman" thirty years ago.

The Penguin stands in a cemetery with his raccoon eyes; his mouth dribbles greenish black saliva. Catwoman and her neon pink apartment sign are right: it's "Hell Here." The inmates are running Arkham Asylum, and "Batman Returns" knows that. 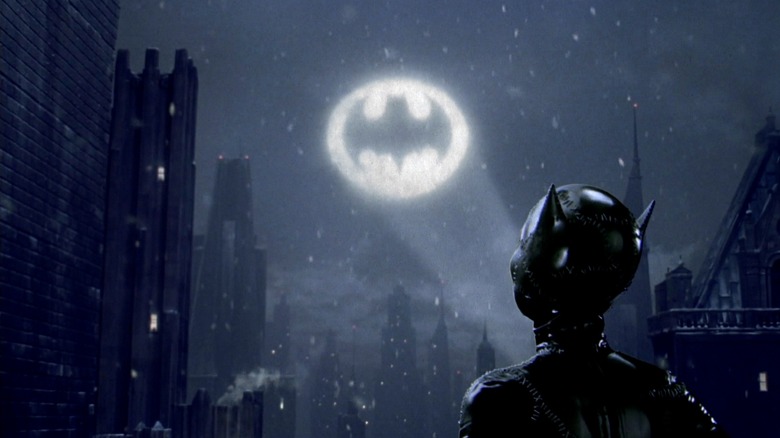 In "Batman Returns," the Batmobile cruises through the snow, leaving tire tracks on the streets of a wintery Gotham — an image since homaged, along with Bruce and Selina's masquerade dance, in "The Dark Knight Rises." Burton's sequel also blithely references historical events that precipitated wars, like the Reichstag Fire and Gulf of Tonkin incident. Penguin gives his Nuremberg rally speech to his commandos, and if any of this seems too overwrought, too dark, too sinister, for a superhero movie, go back and read Batman's first comic book encounter with the Joker. As Bane says, the Caped Crusader and his villains were "born in darkness."

True, this movie ends with Batman in the backseat, but he's being chauffeured around by Alfred, and the villains have lost their lives — at least eight of nine of them, in Catwoman's case. Both Keaton and Pfeiffer would find their way back to the superhero genre with MCU roles, and if you think about how many disposable, one-and-done Marvel villains we've had, it's amazing that Burton was able to pull off the kind of character development that he does in "Batman Returns."

"Spider-Man 3" and "The Amazing Spider-Man 2," for example, both tried to juggle multiple lackluster villains, two of whom were only recently redeemed in "Spider-Man: No Way Home." There's a whole team of five supervillains in that movie. This year, we've also seen the theatrical release of another "Batman" film with Penguin, Catwoman, Riddler, and Carmine Falcone, and the miraculous thing is: it manages to give each character their due, too.

"Batman Returns" paved the way for movies like these. Anchored by Danny Elfman's inimitable leitmotifs and musical score, the first "Batman" sequel is a strange, wonderful beast that could have only come from the mind of the young Tim Burton.

Read this next: Batman Movies Ranked From Worst To Best

The post Batman Returns at 30: Tim Burton Ushered In The Franchise Era By Letting His Freak Flag Fly appeared first on /Film.