Sneakers have taken over the world, but that doesn’t mean you should disregard casual shoes. Sitting between athletic and formal, this broad category of everyday footwear includes some of the most iconic and influential styles ever to step foot into the menswear world.

Casual shoes are characterised by their versatility. They’re your go-to footwear, whether you’re heading out for an evening meal or just working and running errands through the week. They’re lifestyle shoes in the purest sense of the term, and every good footwear collection should be home to at least one pair.

A broad category it may be, but there are certain companies and models that stand head and shoulders above the rest. Here we examine the most iconic casual-shoe brands in the world today, along with the shoes that put them on the menswear map. Ankle boots are a man’s best friend during the awkward transitional seasons. They offer slightly more cover and support than a simple shoe, without sacrificing any of the style. From Chelseas to chukkas, below are the brands making the best in the game. Since 1825, British shoemaking institution Clarks has been creating some of the best casual shoes in the world. It all began with a sheepskin slipper, but the silhouette that really cemented Clarks as a footwear staple and household name was the Desert Boot in 1950.

A simple two-eyelet chukka with a crepe sole and suede uppers, the Desert Boot was inspired by the shoes Nathan Clark had spotted local soldiers wearing while stationed in Burma. It was an instant hit when he brought it back to UK shores. It’s still supremely popular today, thanks largely to its simplicity, versatility and the huge array of colours and materials it’s now available in. Australian brand R. M. Williams is famous for its Chelsea boots. It was founded in 1932 and became known for producing elasticated boots, made from a single piece of leather. In those days, the boots were worn by workers who paid 20 shillings a pair, but today R. M. Williams is better known as a luxury shoemaker, catering for stylish city dwellers who value heritage and high quality.

The label’s Gardener boot is a more rugged version of a classic Chelsea boot. Instead of a flat, leather sole, they feature a robust rubber one that’s designed for the rigours of working life. If you want something even more sturdy, there’s a commando-sole version too, which is tough enough for winter, yet smart enough to pair with tailoring. 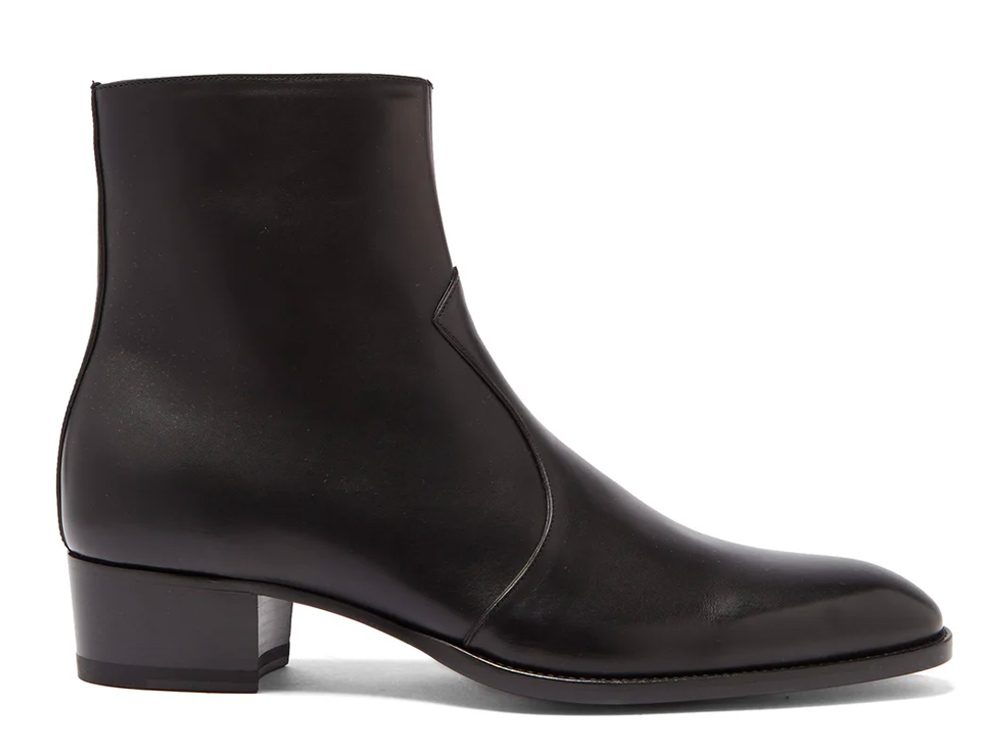 Slimane launched the Wyatt boot in 2013 and it quickly became a core element of Saint Laurent’s upscale-punk aesthetic. It’s a classic leather Chelsea crafted from premium materials, and some versions feature extra details like metal harness loops and elevated heels. Australian manufacturers really know their way around a good slip-on boot, and Blundstone’s existence provides further proof. Making sturdy boots for life in the outback since 1870, this historic outdoor brand has since become an unlikely favourite of menswear insiders and urban fashionistos.

The boot at the centre of the Blundstone brand is the 500. It’s a rugged Chelsea that’s built for the ranch but will work just as well around town with jeans and an overshirt. The 500 is actually a series, so there are many colours and variations that fall under the umbrella. Just look for any boots that are labelled with a three-digit number beginning with ‘5’. 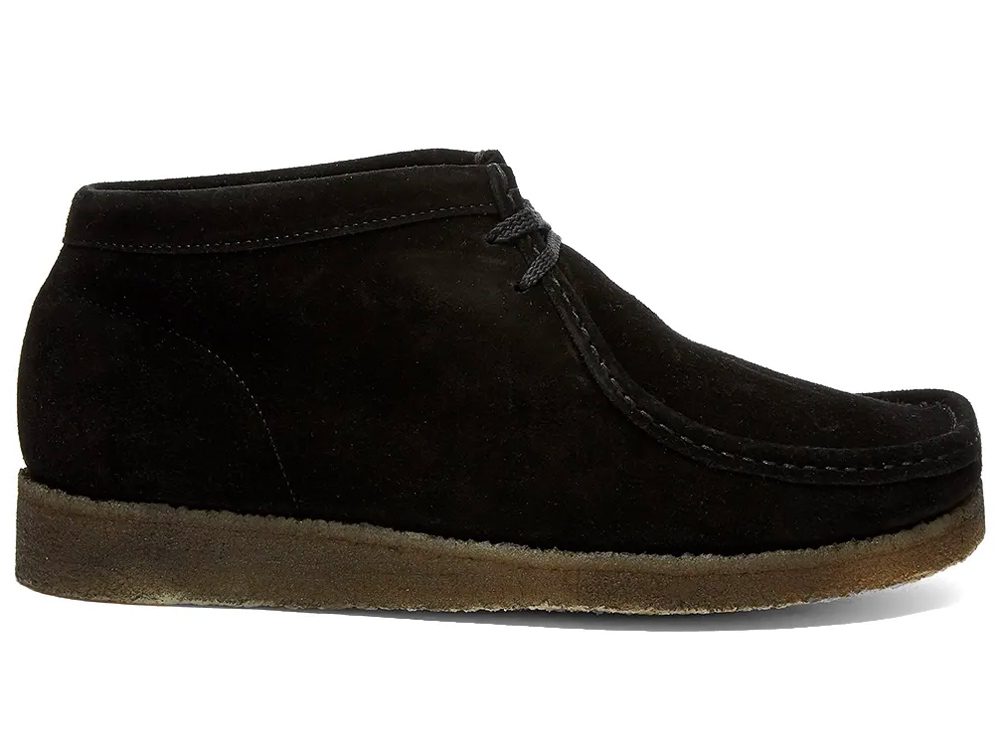 You may not have heard of Irish brand Padmore & Barnes, but you’ve almost certainly heard of the Clarks Wallabee. Well, when the shoe was first developed, it was made exclusively at the Padmore & Barnes factory in Ireland. When the factory closed in 2003, production moved to China, and some people argue that the quality declined.

Since then, Padmore & Barnes has sprung back into action, producing its own Original Boot, which looks a lot like a Wallabee Boot, only handmade in Ireland using traditional methods. Lace-up shoes run the gamut from smart Derbies and brogues to moccasins and boat shoes. They’re great for most situations and versatile enough to work across your entire wardrobe. Here are the styles to know and the brands that make them. Grenson is one of the major forces in Northamptonshire’s footwear-making history, and still produces exemplary shoes and boots to this day. The brand is known for its quintessentially British aesthetic, applying its signature look to everything from brogues to Derby boots.

The Parker shoe is one of Grenson’s staple styles. It’s a Derby shoe with stitching to the toe and a thick yet subtle commando sole for tackling wet British weather. New York City’s Common Projects burst onto the menswear scene back in 2004 with its famous Achilles Low sneaker. It was a shoe that blurred the lines between smart and casual and was instrumental in shifting perceptions around what a sneaker can and should be.

In the years that followed, Common Projects began working on other silhouettes, bringing its trademark contemporary, premium feel to the table. The Derby Shine is CP’s take on a classic Derby shoe. It features a high-shine leather upper stitched onto a crepe, wedge sole. It’s a modern twist on a classic and is finished off with the brand’s signature gold numbering to the heel. 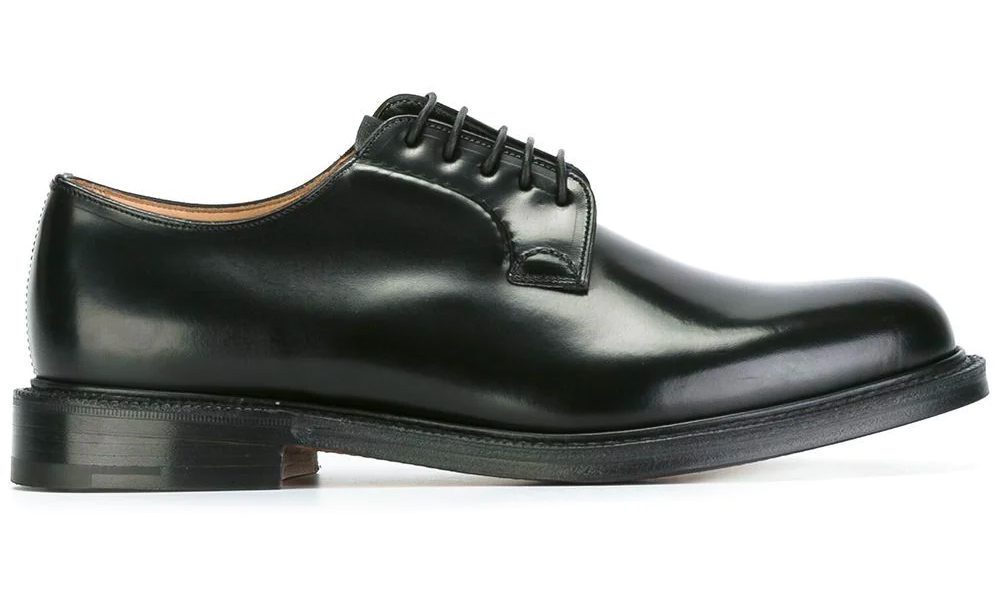 With a rich history dating all the way back to 1617, Church’s is one of the original Northamptonshire shoemaking companies. It has since been acquired by Prada, but still produces some of the finest high-end footwear money can buy.

The Shannon Derby shoe has been a staple of the Church’s brand since 1970. It’s a classic Derby, made using the finest materials and imbued with hundreds of years of shoemaking knowledge and experience. 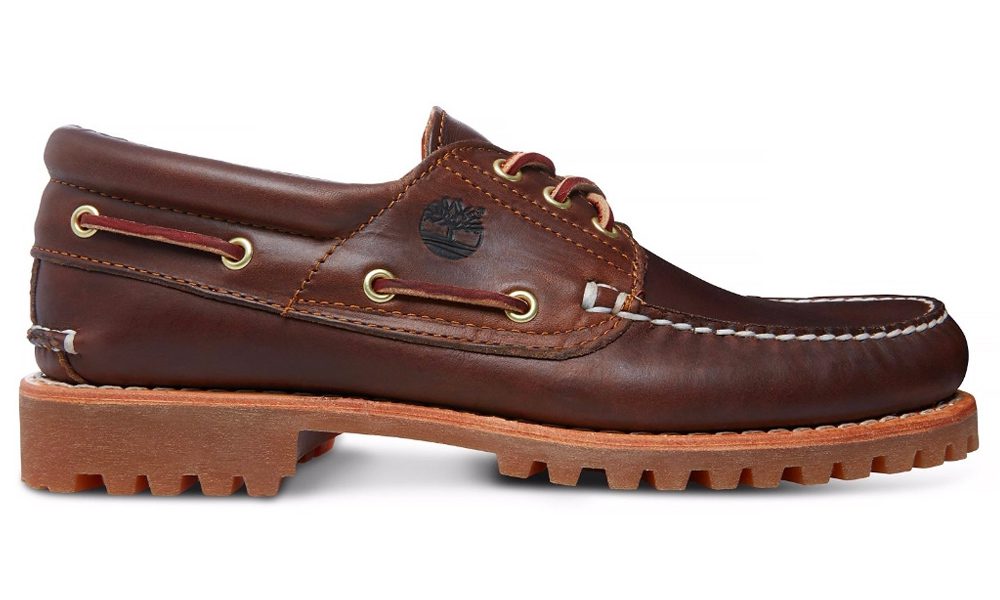 Timberland is probably best known for its 6-inch boot – the big yellow work boot that was famously recontextualised by the hip-hop community and became an icon in the process. However, there is another shoe among the Timberland range with a similarly strong cult following and subcultural connections: the Three-Eye Boat Shoe.

This rugged take on a classic moc-toe deck shoe was popularised by the Paninaro subculture of 1980s Italy, which styled it with relaxed, cuffed denim, Moncler puffer jackets and Stone Island garments. It’s a great-looking shoe and features a thick commando sole that makes it perfect for tackling the cooler, wetter months in style. 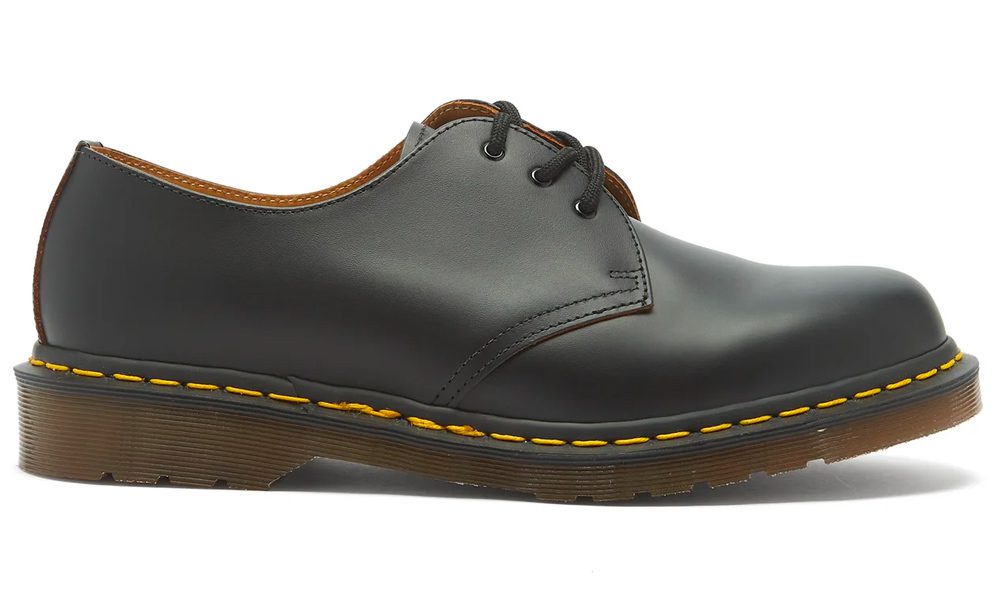 Dr. Martens was founded by Klaus Märtens shortly after World War II. After recovering from an ankle injury, he found his standard-issue army boots were too uncomfortable and set about working on a solution. He used soft leather for the uppers and air-padded soles made from tyres. The result: a range of comfortable, hard-wearing footwear that would go on to win over several influential youth subcultures and take the world by storm.

With its low collar and Derby styling, the 1461 isn’t as lofty as many Dr. Martens styles. It’s a chunkier take on a classic Derby shoe, featuring the brand’s trademark air-cushioned sole, making it perfect for anyone looking for a Derby with a difference. Don’t overlook slip-on footwear when it comes to choosing a pair of casual shoes. It’s a surprisingly rich category, packed full of shoes that are great for the warmer months of the year. Think two-eye boat shoes, loafers, espadrilles and drivers. Below are some of our favourite slip-on shoes from the brands that do them best. As well as fast cars, pasta and brilliant hand gestures, Italy is also known for exquisite footwear. Perhaps that’s why it’s also the birthplace of the best driving shoe ever made.

Featuring a pebbled sole, moc toe and slip-on design, the Gommino from Tod’s is the godfather of all driving loafers. That said, it has plenty of use outside of the car too. Teamed with soft tailoring, this stylish suede shoe is the perfect match for warm summer evenings around town, and can happily be paired with shorts and a T-shirt too. Thanks to some clever hiring over the years, Italian brand Gucci is now the most popular and influential fashion label in the world. A lot has changed over the years to get the company into this position, but one thing has remained exactly the same ever since the 1950s. We’re talking, of course, about the Horsebit Loafer.

This elegant slip-on shoe has become a universal symbol of opulence, extravagance and indulgence. It’s simple yet instantly recognisable and has spurred countless imitations over the decades. Still, the Gucci Horsebit Loafer remains the original and best, not unlike a Rolex: something that many a man aspires to own at some point in his life. For those who can’t stretch to the lofty financial heights of a Gucci Horsebit Loafer, there are some excellent alternatives. First and foremost, the shoes of American brand G.H. Bass, especially the iconic Weejun penny loafer.

Bass Weejuns first hit shelves in the 1930s, but it was when an editor at Esquire magazine discovered and wrote about the shoes that they really took off. In the time that has elapsed since, these humble loafers have barely changed one bit. But then, why would they? 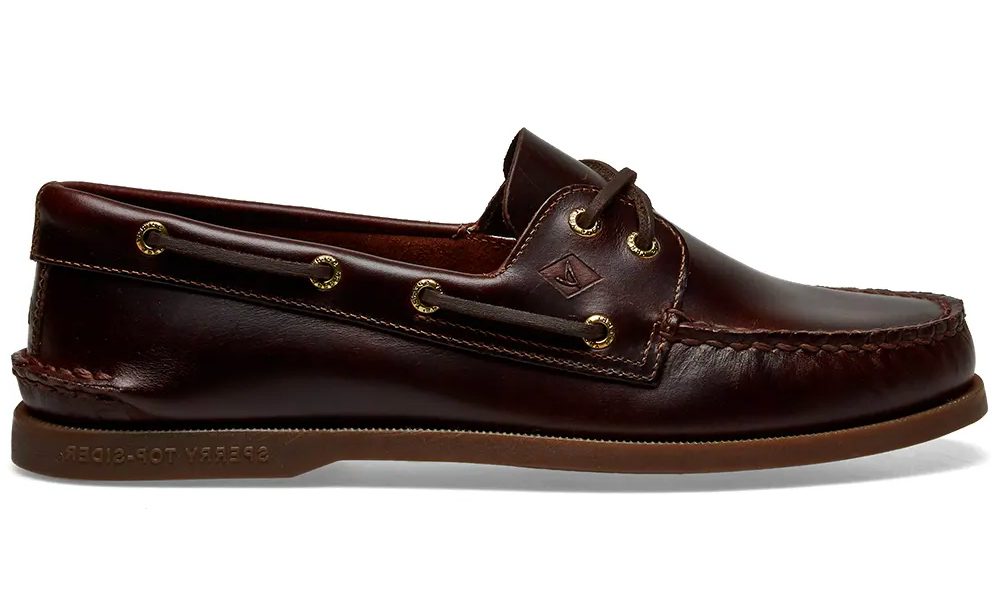 There are many brands making deck shoes, but Sperry is the original and arguably the best. Born in 1934, the sole (no pun intended) mission of Sperry footwear was to keep sailors surefooted on slippery decks – something it managed with inspiration from the most unlikely source.

Founder Paul Sperry got the idea for a unique, anti-slip sole design when he observed his dog moving around the wet deck of his boat. The dog would never slip, and so Sperry examined its paws and designed a sole unit featuring the same zig-zag pattern. He applied it to the Sperry Topsider and an icon was born – a great-looking shoe that could be slipped on and off with ease, and held firm on even the slippiest of surfaces. Founded in 1927, Castañer has been refining its espadrilles over the course of almost a century. Some might say they’re the best espadrilles in the world, and the fact that none other than Yves Saint Laurent himself chose to partner up with the Spanish brand in the 1970s lends credence to their case.

The Pablo is a classic espadrille, handmade in Spain using the age-old traditional techniques. Lightweight and casually elegant, they’re the perfect summer shoe and ideal for those looking for laid-back footwear made to the highest standards.

The post A Step Above: The Best Casual Footwear Brands For Men appeared first on Ape to Gentleman.