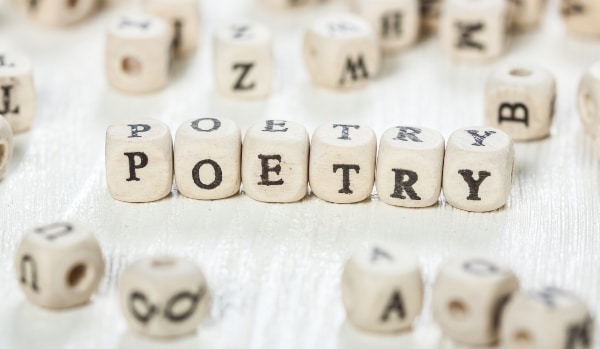 “I’m just a squirrel looking for a nut
You are a wizard harry I’m a what
Glad to believe in #Jesus, He’s the best…
From Fresno to Pomona fuck the rest”
– By Pentametron (https://twitter.com/pentametron?lang=en)

This may seem like a random compilation of Twitter posts that happen to rhyme and that is because they are. Well, the fact that they rhyme and follow the rules of iambic pentameter is actually the result of a computer program that uses an algorithm to string together texts from Twitter, which have the same iambic pentameter and rhyme scheme to create poetry. Although this particular example of poetry may not be widely considered a piece of fine literature, it does still constitute poetry within a very specific genre of writing known as, digital poetry. Digital poetry, sometimes known as e-poetry or cyber poetry, developed in the late 1960s, however, most digital poems were created since the nineties. This relatively new style is quite ambiguous in its definition, as technology develops and different ideas emerge the boundaries of digital poetry shift. In essence, cyber poetry is characterized by having a wide range of approaches and by using computer technology in either its process or end result.

(Author’s description: Game, game, game and again game is a digital poem, retro-game, an anti-design statement and a personal exploration of the artist’s changing worldview lens.)

Electronic poetry takes on several forms such as, kinetic poetry, which is an interactive poetry genre, where words on a screen are put into motion and drift around it. Simultaneously, the words are either drawn to one another or pushed away from each other creating new sequences of text to be read and experienced.

(As the tarot cards shuffle at high speed, the reader randomly clicks the pile and a card is drawn for them. This card sends them to a poem that can only be viewed by choosing that specific card)

Another form of e-poetry is hypertext, which basically contains in its text hyperlinks to images, audio-clips or other words and poems.

(Series of twelve poems all using different programming languages. Every poem is also a program that can be run, while also creating a visual representation of itself)

Code poetry is also growing in popularity. This sub-genre intertwines prose with code language, which means that if the words written in code were real commands created by the author then the poem could also be interactive, but doesn’t have to be.

Billy Collins – Forgetfulness
Experimental video poetry is a more well-known and established category of digital poetry. These types of poems are often featured in galleries or museums, as they blur the lines between not only classic poetry and digital media, but more importantly between literature and art, or art and the digital. Billy Collins, who is a former poet laureate from the United States, greatly contributed to video poetry, even publishing a book on video poems in 1980.

(The poem celebrating the Tarok Gorge park, randomly chooses words and builds them into never-ending stanzas)

There are far too many types of digital poetry to be named. Often the various forms of e-poetry overlap and are combined to create something entirely different and innovative. However, such developments in literature and art are as exciting as they are problematic. As the vagueness of the term signals openness towards what can be considered a “good” poem, it also constitutes a break in traditional or accepted frameworks, from which poetry is understood. The genre’s major criticisms revolve around its newness and whether what follows is the need for an entirely different set of critical terminology. Digital poetry does not exist on paper, which also requires from its readers to learn how to read in the digital sphere. This does not only mean you need to be able to read off of a screen, but understand the premises of new media and the digital in a theoretical and critical manner. Despite its vagueness, digital poems are a creative and unique way of composing poetry. Its mere existence shows that from a societal perspective the digital has become ingrained into the premises of our culture in ways we never imagined possible, while also proving that with these shifts we as a species have adapted our sensitivity and capabilities of creating and understanding the abstract.

If you believe in the work we are doing here at The Good Men Project and want a deeper connection with our community, please join us as a Premium Member, today.

All Premium Members get to view The Good Men Project with NO ADS. Need more info? A complete list of benefits is here.

The post E – Poetry and Its Cyber Branches appeared first on The Good Men Project.